Chairs of boards and commissions express unity in need for more affordable housing. 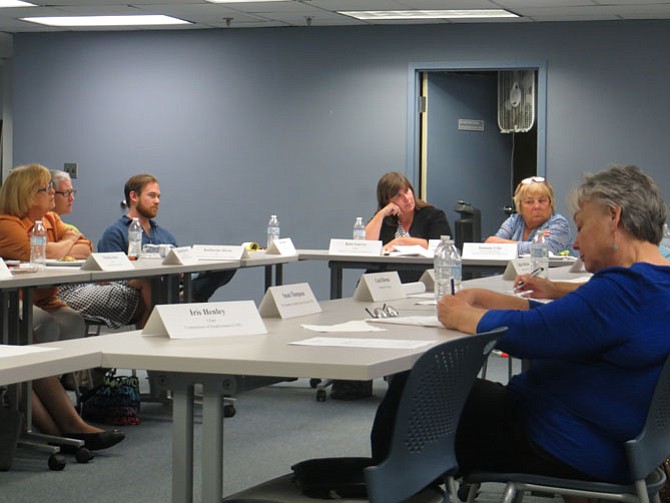 The chairs of Alexandria’s boards and commissions. Photo by Vernon Miles.

Alexandria — City Council may be gone for the summer, but the inner workings of the city government are just getting started. On Aug. 3, in the basement of the Human Services Building, the heads of various boards and commissions across Alexandria met to discuss their priorities as they prepare for the 2015-2016 City Council session. While each group had a number of individual issues they’re working to address, every single organization represented at the table said there’s one problem in Alexandria that dwarfs all others: affordable housing.

“We’re looking for overlaps,” said Kate Garvey, director of the Department of Community and Human Services. “We look at what are the priorities, as individual boards and commissions, and as a group.”

It wasn’t really much of a surprise that Katherine Dixon, chair of the Affordable Housing Advisory Committee, said that increasing the amount of affordable housing units and increasing education on affordable housing opportunities in Alexandria was a priority. More surprising was hearing this priority echoed by groups like the Children, Youth, and Families Collaborative Commission, the Commission on Aging, and others around the table.

According to Sean McEnearney, chair of the Children, Youth, and Families Collaborative Commission, affordable housing is the organization’s highest priority. McEnearney reinforced his commission’s goal of equipping and empowering families in Alexandria to provide for their children, and said available affordable housing is pivotal in accomplishing this.

Carol Downs from the Commission on Aging said her group was primarily focused on not having services cut during the upcoming budget season. After that, Downs said the commission would also focus on increasing the diversity of their leadership and push for additional funding for a nurse case manager. Downs said the Commission on Aging also had a focus on affordable housing, though it was slightly different from the objectives of the other organizations. The Commission on Aging’s priority is funding for long-term-care supportive services to enable aging at home with priority given to existing facilities.

According to a local Department of Social Services Report for 2014, released to the board by Suzanne Chis, the executive deputy director for the Department of Community and Human Services, 12,916 Alexandrians, or 9 percent of the local population live in poverty in Alexandria. 3,921 children, 15 percent of children in Alexandria, live in poverty. While this is slightly lower than the 15.7 percent of children across the state living in poverty, it’s higher than the 9.6 percent throughout Northern Virginia.

But in many cases, more funding towards affordable housing is just part of the problem. Carter Batey, chair of the Social Services Advisory Board, said language and culture can often be a barrier to helping some who qualify for affordable housing to actively seek it. Alan Dinsmore, also from the Commission on Aging, said he’s experienced this firsthand in trying to get the city’s Hispanic immigrants enrolled into affordable housing programs, whom he said often have a very different interpretation of “independent living” programs. According to Batey and others at the meeting, illegal immigrants in Alexandria often believe law enforcement will use social services programs to arrest and deport them.

Monika Jones, chair of the Human Rights Commission, said that one way of helping to get groups like Alexandria’s immigrant and Hispanic communities involved in the various boards and commissions is the move the meetings out of city hall and into the neighborhoods. Jones said her organization plans to host more meetings at the Beatley Central Library or at the Charles Houston Recreation Center. Others were not quite as convinced that this transition would accomplish what Jones hoped it would.

“I hate to be the person who says ‘it’s already been tried and it doesn’t work,’” said Mollie Danforth, chair of the Commission on Persons with Disabilities, “but the Parent Teacher Association Council held meetings everywhere throughout the city and it didn’t work. You need to start with people in those communities who have expressed a desire to be more involved.”

Danforth faces her own set of steep challenges. In addition to making housing more affordable, Danforth said the housing in the city needed to be more disability-accessible. On a larger scale, Danforth said there are still major parts of the city that are inconvenient or even dangerous to those with visual impairments or in a wheelchair, like brick sidewalks and diagonal streets. One of the more unusual problems Danforth said her commission hopes to address in this budget cycle is equipping Alexandria’s emergency shelters with recharging stations for electric wheelchairs. Currently, Danforth said no emergency shelter in the city are equipped to handle citizens in electric wheelchairs and are sometimes turned away.

Unsurprisingly, most of the commission chairs believed the only solution to the affordable housing and other social services crises throughout the city is an increase in funding. This past year, Danforth said City Manager Mark Jinks fairly successfully pitted the groups against each other during the budget cycle. This year, Danforth and other chairs said the groups hope to present more of a unified front.

“Instead of fighting over what our slice of the pie is going to be, we need to grow the pie,” said Batey.

“We’re down to the bone here, even into the marrow on our services,” said McEnearney. “We’ve cut, and we can’t cut anymore.”