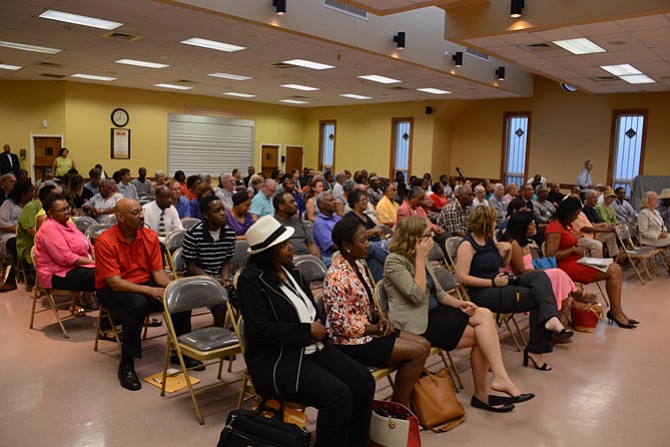 Many members of the community came out to a restoration of rights update from Secretary of the Commonwealth Levar Stoney at Bethlehem Baptist Church in the Gum Springs area of Alexandria. Photo by Tim Peterson.

Many members of the community came out to a restoration of rights update from Secretary of the Commonwealth Levar Stoney at Bethlehem Baptist Church in the Gum Springs area of Alexandria.

Fifteen years ago, a local man made a mistake. He was working in the automotive industry and accepted a gift of socks, ties, suits and gloves. The merchandise turned out to be stolen and valued at over $200, the minimum for a felony charge in the Commonwealth of Virginia.

“I never hurt, harmed or robbed anyone,” he said. “I was never behind bars, I’ve been married 20 years to one woman.”

But the felony conviction took away many of his rights, including the right to vote.

“It’s affected my life and that’s the truth,” he said.

Taking away felons’ rights dates back to the 1904 Virginia Constitution, Del. Scott Surovell (D-44) said at an Aug. 5 meeting at Bethlehem Baptist Church in the Gum Springs area of Alexandria.

A literacy test and poll tax were established in addition to felon voter disenfranchisement, Surovell explained, to target potential African-American voters. The disenfranchisement continues to be an issue, over 100 years later.

“The Route 1 corridor has a lot of folks struggling to make it and who have a felony conviction,” Surovell said. “They end up trying to start getting on their feet on Route 1. Getting their rights restored, they feel like they have part of their life back.”

“We live in a society where you ought to be able to pick your leaders,” he added.

Surovell then introduced the Secretary of the Commonwealth Levar Stoney. Stoney told a personal story of his father, who “made some mistakes” and had his rights taken away for a period of time.

“You wear that scarlet letter on your chest day in, day out,” Stoney said, explaining having seen the embarrassment of being a convicted criminal and trying to find a way in society, including applying for jobs. “Am I going to check that box today?”

Virginia governors have been working towards making it more feasible for felons to have their rights restored for several years, but none have affected as many individuals as Gov. Terry McAuliffe (D), Stoney said.

Since taking office (and as of the presentation), Stoney said 9,350 individuals have had their rights restored. Of those, 71 percent have registered to vote.

Some of the policy changes under the McAuliffe administration that have helped increase that number include reclassifying drug convictions as non-violent, reducing the more serious crimes restoration of rights application from 13 pages to 1, developing a process that shows the restoration of rights on an individual’s criminal record and removing court costs from the eligibility requirements.

A significant barrier that still remains, Stoney said, is “People who don’t even know. You can get your rights back to vote in the Commonwealth of Virginia.”

During his presentation, Stoney called the local man up to the stage and announced the man would have his rights restored on the spot. After Stoney read the proclamation from McAuliffe, he handed the paper to the emotional man and the two embraced one another.

In his brief remarks, the local man mentioned his daughter who was in the audience with him, and his wife who couldn’t be there because she was shuttling his son from an activity.

“I’m about being good on the field and off the field,” he said. With his rights restored, he intends to vote and be a more active member of society. “I will play the sport,” he said figuratively, “I promise you that.”