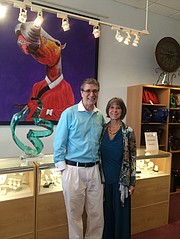 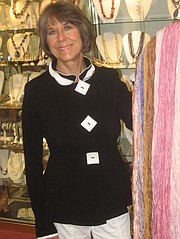 Photo by Gerald A. Fill/The Gazette 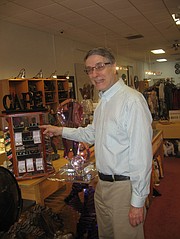 Carol and Richard Lowy, co-owners of the retail gallery, Richard Carroll, are celebrating the fifth anniversary of managing their business at Belle View Boulevard in the Belle View Shopping Center. The shop sells a variety of women’s designer clothes, handcrafted jewelry, necklaces, and gift items.

The couple have been married for 36 years. They have one son, Richard Leonard Lowy, a graduate of George Mason University.

Richard Lowy likes to see himself as the “godfather” of the personal touch retail gallery business and a true native of the Nation’s Capitol. “I was born and raised in the Brentwood Village North East neighborhood in Washington, D.C. My parents and family were of modest means but were frugal and we were happy and enjoyed the friendship and safety of the neighborhood. It was my experience growing up there in which those neighbors and family friends involved in small business generally seemed to be better off and more independent than most others. That for me was a primary reason I gravitated toward small business at a very early age,” he said.

Except for serving in the U.S. military, Richard Lowy has been involved in retail businesses for over 40 years, beginning with employment at the catalog company, W. Bell. He then moved to Hecht’s as an assistant buyer for women’s clothing. Demonstrating his willingness to take risks despite his lack of experience, one summer in his early years he opened up three small retail outlets beginning with a pierced ears earring business in a 8-foot by 10-foot booth on the Boardwalk at Ocean City.

“I knew absolutely nothing about the pierced ears earring business but discovered it was a terrific moneymaker and as I look back on those days I can’t believe it today but I researched how to pierce ears and spent one summer actually doing that,” Richard Lowy said.

Then in rapid succession he opened a variety store called “The Last Straw” in Rehoboth Beach, and on weekends another store also in Ocean City which he called, for lack of a better description, “an eclectic flea market.”

“I barely broke even that summer but I learned a lot and since those early years I have become far more conservative and successful as a result of those lessons learned. Several years later I met Carol in my Arlington store,” he said. She came in as a customer. “After dating her twice I told her we were going to get married. She thought I was crazy but eventually we did get married and it was the most important decision we ever made. She made and continues to make all the difference in the world in terms of our long-term happiness in life and our business success.” At the time they met, Carol was working for Lockheed Corporation.

What makes Richard Carroll different from other retail stores in the region?

“It is unlikely there is any other neighborhood retail gallery store in the region where you can buy in the same store a one carat diamond, handcrafted jewelry, an ottoman, a lady’s’ dress, a chess set, a lamp, a man’s tie, a lady’s handbag, cuff links, ladies’ slippers,” Richard Lowy said. “Furthermore, our approach to customer relations is definitely old school; a personal touch when you walk into our store that will make you feel right at home, whether you buy something or not. We are not a mall store or a big box store. I see us as a throwback to the small personal touch stores in past generations. Our customers’ trust us to provide them with good value for the price they are paying.”

The Lowy’s special touch atmosphere includes their pet Rottweiler, Trooper, who is their constant companion at the store. According to the Lowy’s, he is just a big teddy bear, and stays quietly in his large cage (he is 110 lbs according to Carol Lowy) at the back of the store.

Customers also enjoy fresh coffee and chilled bottled water. Customers who attend one of their periodic weekend sales events will be introduced to new sales items and offered discounts on many offerings. They also are treated to a buffet that includes smoked salmon, cheese, crackers, wine, and treats of all kinds. “Our customers leave the store with a smile, with or without something they purchase,” Richard Lowy said. “But make no mistake, they will be back. The overwhelming majority of our customers are repeat ones; some coming from far away out of town.”

In celebrating their 5th anniversary at the Bellevue Shopping Center the Lowy’s have announced that a new website will be up and running in November, in time for the holiday gift season. “We are confident that our website will excite a new generation of customers to our gallery as well as better inform our longstanding customers with easily accessible information on new lines of clothing, jewelry and gifts,” Carol Lowy said.

Some of the items offered at the shop include:

Aug. 23, 4-8 p.m. This event will introduce a new line of Murano Jewelry from Italy, a new Fall collection of clothes and gifts, a variety of discounted items, as well as refreshments.