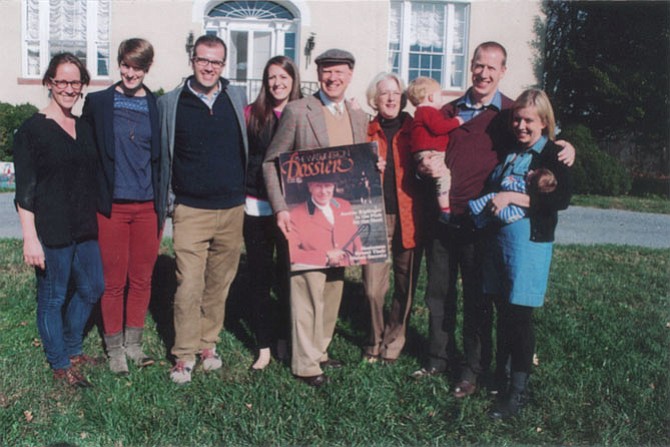 “I opened my front door this morning and there was a fox on my front porch,” Irvin “Skip” Crawford said.

Ironically, “Skip,” a Joint Master of Foxhounds (jtMFH) of Potomac Hunt was addressing members of Potomac Hunt who had met for the 10 a.m. annual Thanksgiving Day hunt at Montevideo, the historic River Road home of the late Austin H. “Kip” Kiplinger.

“Kip used to call and tell me, ‘There are foxes in the field this morning. You will have a good hunt.’ He was right.” Austin Kiplinger loved horses, hounds, fox hunting and life in the country.

“Dad began fox hunting in the 1950s,” his son, Knight Kiplinger said. “This is where he wanted to be at all times, at this house, among the surrounding fields and in the countryside.”

Knight included these memories while welcoming approximately 60 hunting members astride and an equal number of “hill toppers,” those who follow the hunt on foot, or on country roads, in cars.

Although “Kip” Kiplinger died Nov. 20, at age 97, six days prior to the Thanksgiving Day hunt, his presence was everywhere. An avid foxhunter, he not only enjoyed the thrill of the chase, but the camaraderie of his fellow admirers of horses and hounds. For this occasion his family had placed around the front driveway circle at least a dozen blown up color photographs of Kiplinger astride, in hunting attire, and in numerous instances talking with other members at a hunt meet at Montevideo when the traditional “stirrup cup” is served.

Following the traditional “Blessing of the Hounds” delivered by the Rev. Kerry Stoltzfus, a guest minister at the Boyd’s Presbyterian Church, Potomac huntsman Brian Kiely blew a loud and clear “Gone Away,” the signal to the hounds it was time to get down to business.

Kiely is in his first season as Potomac’s huntsman. An Irishman from the “Old Country” with quite a noticeable brogue, he stepped into the stirrups of Larry Pitts. Pitts retired following 35 years as Potomac’s huntsman during which time he amassed dozens of hound trophies, including “best pack,” when competing at hound shows throughout the east coast and beyond.

To quote Stoltzfus it really was a day of “The beauty of the earth, the glory of the skies” as the huntsman led a pack of glistening lemon and white American foxhounds away from the entrance of the Kiplinger home, across their fields and into the woods. If that sounds like going to Granma‘s house, they weren’t! Shortly thereafter hounds struck a line in the woods directly behind Kiplingers.

The unseasonably dry, 62-degree weather did not provide for ideal foxhunting. Hounds have difficulty following a fox’s scent on dry ground. It wasn’t until after another hour of hunting that hounds “gave tongue,” picked up a scent and chased “Reynard” from the Partnership Road race course, crossed behind Kiplinger’s barn area, went across Montevideo Road, ducked into a densely wooded area and went to ground, just in time. Giving thanks.

“When we passed by Kip’s back yard, I turned around and said to Sam McGrath, ‘Take over,’” Vicki Crawford, jtMFH, confessed. “I rode fast to my trailer parked in the field, and ditched my vest. It was just so hot,” she said.

It was good timing for Crawford. “Ten minutes later hounds appeared running right toward where I was. I was right back with them when they denned the fox,” she said.

By then, it was early afternoon and thoughts of many drifted toward preparations for

Thanksgiving dinner with family and friends. Many hunters had bailed out and headed for their trailers. “Some people were out for only an hour. It was just too hot for them,” Crawford said.

However, she wasn’t the only one planning ahead. “Skip and I had 25 for dinner,” she later explained. “Everyone brought things. I did the turkey,” she offered. That must have been one big bird.

Perhaps the fox her husband, “Skip,” mentioned seeing that morning on his front porch, when he opened the door, was also looking for a turkey. They’re sly, you know.