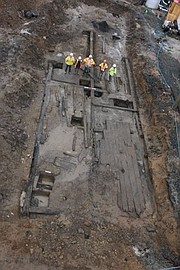 Full foundation of the 1755 warehouse. 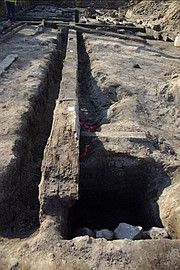 One of the beams from the warehouse foundation.

Once thought lost to demolition and fire, pieces of a mid-18th century warehouse on Alexandria’s waterfront have been reclaimed. The discovery at the construction site of Carr’s Hotel Indigo came as a surprise to city historians who had assumed the warehouse was demolished after it was built on top of in the 1770s. The discoveries at the site include a largely intact frame foundation, as well as a beam from the pier, pieces of barrels, and a mammal skull.

The warehouse, the earliest historic structure in Alexandria to be archaeologically excavated, was built in 1755 by John Carlyle, six years after Alexandria was founded. Joanna Gohmann from the Office of Historic Alexandria said the building was likely used to store grain and other brewery supplies.

“It influences the interpretation of the waterfront area of the city, which is under development,” said Lance Mallamo, director of the Office of Historic Alexandria. “We had hoped to find evidence of this structure because we knew it was at this location. What surprised us was how much of it remained from 1755, eight feet under the mud. We were very pleased to find it there.”

According to Gohmann , finding intact 18th century wood is virtually unheard of, especially in such a quantity. The wood typically rots or decays over time. But Gohmann said sand and mud from the Potomac had kept an airtight seal around the wood beams. The staff at the Alexandria archeology museum needed to continually spray the beams with water to keep them from deteriorating.

One of the most intriguing questions brought up by the wood’s discovery is its massive size. According to Gohmann, some of the beams were 30 feet long and two feet in diameter.

“This tells us there were trees at least that big in the area,” said Gohmann. “Dating will tell us when they were cut and from where.”

Mallamo theorized that its size and its survival are not unrelated.

“It was probably first growth forest,” said Mallamo, “some of the original wood in Alexandria that was leveled to build it. That wood tended to harden rather than decay with age.”

Currently, samples of the wood have been sent to the Maryland Archaeological Conservation Lab for analysis. The wood had to be sawed down to 12-foot pieces, the largest the lab could accommodate. The beams’ analysis will take three years, which Mallamo said could help show some of the different building techniques used in early Alexandria.