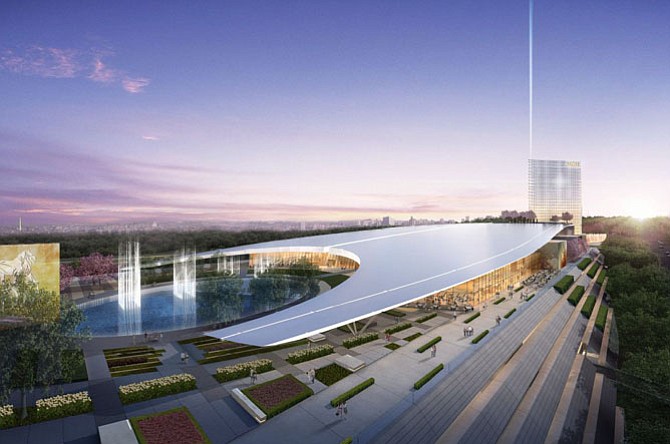 Across the Potomac, the MGM Casino is beginning to take shape. By the end of next year, Alexandria will be a short drive across the Potomac from a casino larger than any in Las Vegas. Representatives from MGM spoke at the Campagna Center on Dec. 1 to address the positive and negative impacts the casino will have on Alexandria.

According to Logan Gaskill, MGM’s vice president of human resources, construction is beginning on the 10th floor of the project, and crews are attempting to seal parts of the building to be able to continue to work throughout the winter. If all goes according to schedule, Gaskill said the casino will be set to open in the fourth quarter of 2016.

Danielle White, regional vice president of community engagement for MGM, tried to reinforce the idea of the project as more than a casino. Gaskill and White emphasized the high-end retail options at the casino, naming Gucci and Louis Vitton as two brands MGM was looking to include. Other features at the site include a 3,000-seat theater, with rows that can fall to transform the room into an arena or boxing ring.

“Only 30 percent of the revenue comes from gaming,” said White, “Much of our focus is elsewhere.”

The casino will employ 3,600 employees, but 50 percent is already committed to come from Prince George’s County. The other 50 percent, Gaskill says, could come from D.C. or Northern Virginia.

“This is not a zero sum game,” said Dave Mallard, president of the Campagna Center, “This will have a tremendous impact on job creation and tourism… and there’s opportunity for Alexandria as well.”

But if the new casino comes with benefits to the city, Gaskill also acknowledged that it has a share of problems. One of the biggest impacts Alexandria will feel will likely be in traffic, particularly increased congestion on the Woodrow Wilson Bridge.

“The reality is, there will be tough traffic issues,” Gaskill said, “We’re exploring different options with local authorities. As we open, there will be rough moments.”

“National Harbor didn’t have much of an impact,” said Harry Mahon, “I don’t really think this casino will either.”

Some were encouraged by the casino’s focus on high-end retail, saying it will help keep the casino’s businesses from competing with Alexandria.

“This should help a lot of our local shops,” said Lonnie Rich. “This is really good for our unique stores, and we’ll get a lot of hotel spillover.”

“From the city’s perspective, we welcome MGM, particularly for job sector growth,” said Mayor William Euille, and echoed the comparisons to National Harbor. “There were concerns from small businesses over National Harbor, but that didn’t happen.”

Euille also said he trusted the newly established MGM Casino Task Force to address issues of parking and transportation, as a similar one did during the growth of National Harbor.