“We’re here to share the love with people thousands of miles from us and right next door." 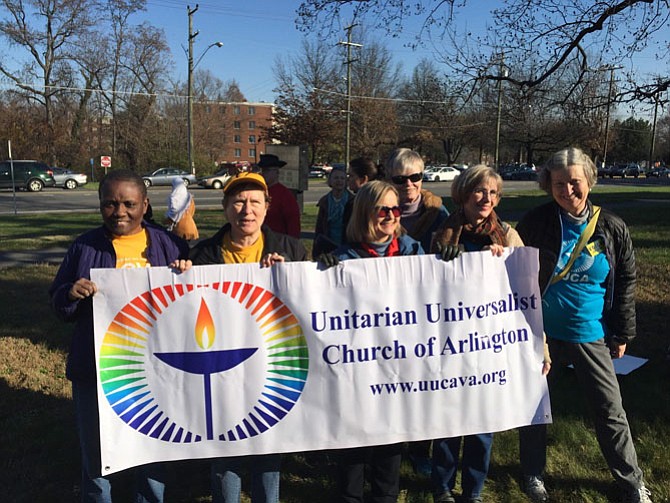 The Unitarian Universalist Church of Arlington marched with other local churches. Photo by Vernon Miles.

Imam Johari Abdul-Malik thanks and welcomes the interfaith V.O.I.C.E. community. 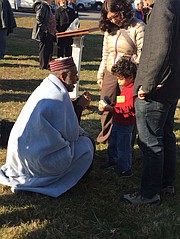 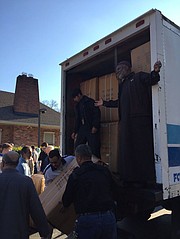 Imam Johari Abdul-Malik with one of the trucks full of supplies for refugees.

The last month hasn’t been easy for the Dar al-Hijrah Islamic Center in Falls Church. Following the Paris attacks, a man showed up at the gates, rattling them, screaming epithets at those attending services and screaming “You’re all going to die.” He was escorted away, but a week later, another man threw smoke bombs and a molotov cocktail into the parking lot.

The march to Dar Al-Hijrah on Dec. 5 was originally just to raise support for Syrian refugees, but after these events and the national discussion of banning refugees, the tone was changed to be more directly supportive of refugees and Islamic communities in the United States. Organized by Virginians Organized for Interfaith Community Engagement, V.O.I.C.E., the blanket drive for Syrian refugees and peaceful march down Route 7 sought to show solidarity between Dar al-Hijrah and other religious communities in the area. More than 3,000 blankets were collected and nearly as many coats. The blankets were loaded into moving trucks to be delivered to a local relief agency.

“The theology of fear seems to be gaining traction,” said Alisa Glassman. “This is a reminder to ourselves and our neighbors about who we are. Any time there is an event like this, there is an increase in discrimination. We want our brothers and sisters at Dar al-Hijrah to understand that we’re there for them.”

Various Christian and interfaith groups gathered on the front lawn of the First Christian Church. A few moments later, a large gathering from Dar al-Hijrah joined them, led by Imam Johari Abdul-Malik. In the past, the Dar Al-Hijrah Islamic Center has come under scrutiny for its associations with Nidal Malik Hasan and two of the 9/11 hijackers, but Dar Al-Hijrah and Abdul-Malik have been vocal opponents to terrorism and its association with Islam.

“We’re here to share the love with people thousands of miles from us and right next door,” said Abdul-Malik.

Among the attendees was the Unitarian Universalist Church of Arlington. The Rev. Dr. Linda Olson Peebles represented the church and encouraged her congregation to build stronger ties with Dar al-Hijrah and similar institutions.

“We need friendship and partnership,” said Peebles. “We need to reach out across our boundaries.”

Lavona Grow, an Arlington resident and a member of the church, said she was there because she believed the march and the blanket drive was part of a moral imperative.

David Gortner from the Virginia Theological Seminary in Alexandria said that he attended the ceremony to show his support for other religious communities. Gortner said he was deeply moved by images from Egypt of Muslims forming circles around Christians to protect them while the latter prayed, and vice versa.

Abdul-Malik said that the police investigations showed that the men who’d harassed the center both had histories of instability.

“They’re just caught up in a climate of Islamophobia,” said Abdul-Malik. “They weren’t part of a hate group. In a way, they’re victims too. Our prayers are with them, and hopefully, changing the climate of the community can give help give stability to their lives.”