Honoring Washington and his soldiers. 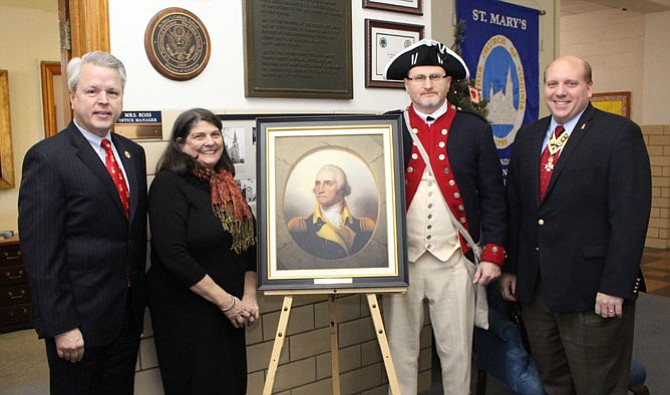 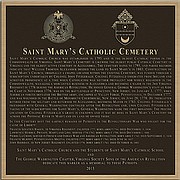 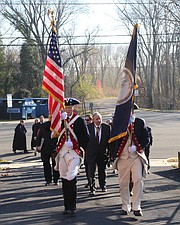 The Virginia Society's Color Guard Detachment leads the procession into the cemetery.

The procession enters the cemetery.

Members of the Sons and Daughters of the Revolution as well as a representative of the Children of the American Revolution participate in the ceremony.

Alexandria has many ties to the American Revolution, including George Washington, often referred to as the founding father of the United States. After securing American independence, many of General Washington’s staff from the Continental Army moved to Alexandria to be near their old commander. One of Washington’s closest friends was his Aide de Camp, Col. John Fitzgerald, who served with him throughout the Revolutionary War. He had, in his own right, played a prominent role during the war. He was also a very prominent Alexandria citizen and was elected and served as mayor 1786-7.

Washington and Fitzgerald remained close friends in the years following the war and Washington’s retirement from the Presidency. What is not generally known is that Washington played a very significant role as a founding father of St. Mary’s Catholic Church and cemetery, the oldest Catholic parish and cemetery in Virginia. In 1795, Col. Fitzgerald with the help of Washington founded St. Mary’s, along with its cemetery. St. Mary’s is still located at the original site at 310 South Royal St. The cemetery occupies an oblong plot between Royal and Washington streets bounded on the north by St. Mary's School and on the south by the busy Interstate I-95 approach to the Woodrow Wilson Bridge. It is bounded by a wrought iron and brick fence with a gate at the north end at Washington Street indicating a "1795" date. There is a plaque at the church which states:

“In grateful acknowledgement of their aid in establishing this church the three trees to the north of this stone have been dedicated as follows to General George Washington as subscriber to the building, Colonel John Fitzgerald, his favorite Aide de Camp, as the collector of the building fund, Colonel Robert Hooe, Mayor of Alexandria, as the donor of the acre of land.”

Col. Fitzgerald died on Dec. 16, 1799. Although reported as having been buried at St. Mary’s cemetery, the better evidence suggests he was buried across the Potomac River on property he owned in Maryland.

A few years ago the George Washington Chapter of the Sons of the American Revolution marked the grave of Private Lawrence Hurdle who died in 1848 at the age of 98. Full honors were provided, including a color guard. Two of the church parish priests participated in the ceremony. There is a brass plaque and commemorative marker at his grave in the Hurdle family plot that cites the service in the American Revolution. Members of the Hurdle family are still members of the church and attended the program.

Several other Revolutionary War soldiers are known to be buried in the cemetery. Unfortunately, the early records of burial plots are missing. Alexandria Historian Michael Miller, in his book “Burials in St. Mary’s Catholic Cemetery 1799-1983,” identified the first known burial at the new cemetery as Caven Boa who died Aug. 20, 1799. He was a member of the Corps of Artillery and was buried by full military honors. His grave site is among those unknown. Local historian Wesley E. Pippenger in his “Tombstone Inscriptions of Alexandria” identified known Revolutionary soldiers buried at St. Mary’s that included Hurdle. Two other identified were Francis Ignatius Hagen who died in 1830 at age 76; and Pierre La Croix who died in 1830 at the age 88. La Croix served in the French and Indian War under Gen. Montcalm and later in the Revolutionary War under General Montgomery.

This historic cemetery includes many other soldiers from other wars. For example there are over 40 soldiers from the Civil War buried there. All of this is a reminder of the importance that Alexandria has in the history and development of the United States.