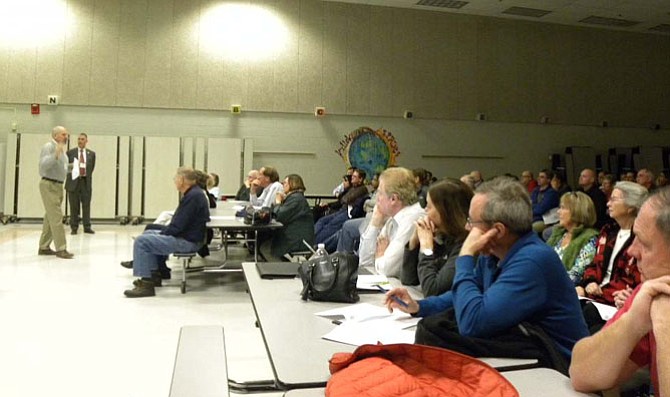 Residents in the neighborhoods of Shirley Gate and Popes Head roads attend a community meeting about the planned interchange and extension on Monday, Dec. 7. Photo by Abigail Constantino. 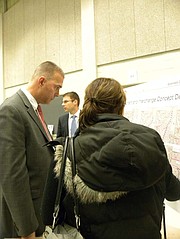 FCDOT director Tom Biesiadny answers questions about the plans for an interchange and road extension at Shirley Gate and Popes Head roads after the community meeting on Monday, Dec. 7 at Willow Springs Elementary in Fairfax.

Almost nobody who attended the meeting, with the exception of Fairfax County Department of Transportation representatives and Supervisor Pat Herrity (R-Springfield), thought that the extension project for Shirley Gate Road was necessary.

The community meeting was held on Monday, Dec. 7 at Willow Springs Elementary in Fairfax.

“They don’t seem to know the questions that are being asked,” said Valerie Nemirow. She took the opportunity to ask FCDOT’s Bob Kuhns and director Tom Biesiadny about the stakeholders they consulted in coming up with the Preferred Alignment, which creates an interchange at Popes Head Road and the Fairfax County Parkway and extends Shirley Gate Road, connecting the parkway to Braddock Road.

“They seem to be spending a lot of money on building a road extension that’s unnecessary,” said Sandra Moran.

FCDOT representatives said that a coarse estimate for the interchange plus alignment of Shirley Gate Road is $60 million.

Biesiadny said that there is money for the design from the Transportation Priority Plan passed by the Board of Supervisors last year, but they are submitting several grants to fund the project.

According to the FCDOT corridor planning study, the purpose and necessity of the extension is to relieve congestion on Fairfax County Parkway and to provide access to Patriot Park East, avoiding entrance off Braddock Road.

But many were not convinced that the extension would alleviate traffic, even as Biesiadny referred to a slide indicating projected traffic in 2040 with the extension versus without.

Nor were attendees sold on the plan’s ability to reduce crashes on that road.

Moran said that cameras on the intersection were a deterrent to speeding but those have stopped. Biesiadny said that the traffic camera authority expired.

Popes Head is a major issue, said Herrity. He said that he is familiar with the road and has made that “suicide left” many times. “We have to get it fixed. I know it’s going to happen. The question is when and how soon,” he said.

Biesiadny gave a timeline estimate of five to 10 years: two years for the design, one year for right-of-way studies and three to five years of construction.

John Marino, president of the Ridges of Glendilough Community Council, said his association wants to keep new traffic that would be created away from his neighborhood, which sits on the Pope Head Road and Shirley Gate Road intersection. There are about 95 houses in this neighborhood, said vice president Randall Bowen.

J. David Sittler, who lives west off Popes Head Road, said that the extension would make Popes Head a cut through, affecting the homes in the neighborhood.

“My house will be devastated. I couldn’t give it away,” said Wayne Pennington, whose property is smack in the middle of the proposed interchange, which would be 44 feet from his house that predates the Fairfax County Parkway, he said.

The extension of Shirley Gate Road has been included in the Fairfax County Transportation Plan since 1991. More information can be found http://www.fairfaxcounty.gov/fcdot/.