Langley Orchestra Kicks Off the Season 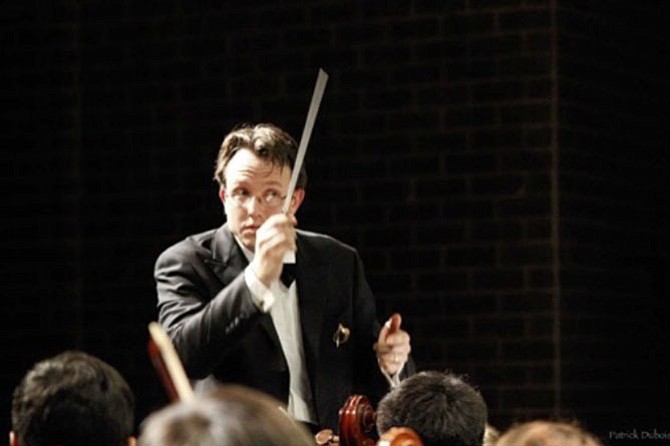 Langley High School’s Orchestra kicked off the year on Dec. 1 at South Lakes High School. Continuing the tradition of themes director Dr. Scott McCormick and Ms. Elizabeth Leung are known to use for their concerts, the music, food, and even the MC was British. Senior Maria McQuade explains, “I’ve always loved the themed concerts that we’ve had because it makes it an entire experience rather than a bunch of random music.”

Guidance counselor Julie McGreevy donated her time to the Langley Orchestra in order to bring the British spirit to life with her endearing accent. Ms. McGreevy utilized her British heritage to introduce and detail each piece. Senior Jacob Baker raves, “Ms. McGreevy did a great job introducing every piece and had hilarious facts before each song.”

The Concert Orchestra composed of freshmen and sophomores opened the concerts with Percy E. Fletcher’s lively tune “Folk Time and Fiddle Dance” and G. F. Handel’s “Allegro” from Concerto Grosso Opus 6, No. 1. To segue between Concert and Sinfonietta Orchestra, the talented junior Sophia Wugang performed “Toccatta” by Henry Purcell, leaving the audience in awe. The Sinfonietta Orchestra took the stage with the eclectic “English Folk Song Suite” composed by Ralph Vaughan Williams followed by “Dashing Away” from Suite for Strings composed by John Rutter, which proved to be a crowd favorite. The Symphonic Orchestra comprising primarily juniors then performed alongside band students Sandra Ng and Wendy Tang as well as harp student Mary Duplantier to perform “Fantasia on Greensleeves,” another piece composed by Ralph Vaughan Williams. Orchestra students then performed “Capriol Suite” composed of four movements by Peter Warlock. To end the night, the Philharmonic Orchestra performed “A-Roving,” another piece from Suite for Strings and “St. Paul Suite” composed by Gustav Holst.

For a festive fundraiser, the Tri-M Honor Society collaborated with the Langley Orchestra Society to have a silent auction to auction off a variety of items, coupons, baskets, etc. The winners were announced at the end of the concert, helping save a currently at-risk music department. An announcement was made during the concert to inform the audience of the potential budget cuts of elementary programs, which would inevitably decrease the level and intensity of high school orchestras. Senior and Tri-M president Swetha Ramesh thought that “events like these are so important to high schoolers because they allow music to become a part of our lives. That’s something that really can’t be taught from a textbook.”