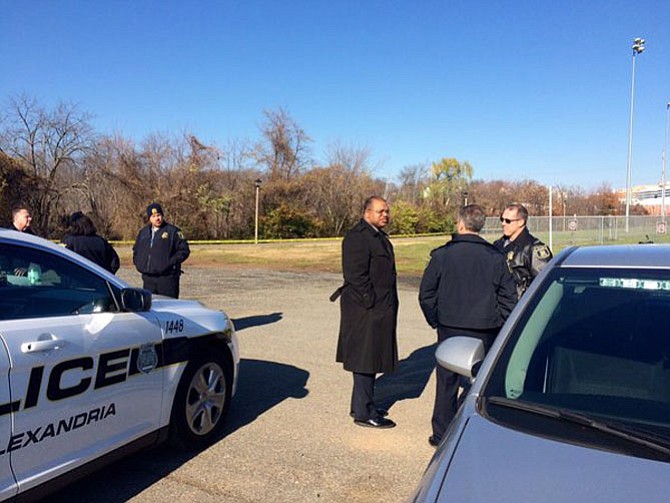 Chief Earl Cook at the scene of a death investigation. Photo Contributed

It took a fourth murder in Four Mile Run Park on Dec. 4, but the Alexandria Police have finally opened the public to a hint of insight into the ongoing investigations. Police Chief Earl Cook spoke to the City Council on Dec. 8, and while he would not give details on any ongoing investigations, it’s clear police suspect the murder may be gang-related.

“The two recent homicides, we’re still actively working on that,” said Cook. “We have detectives working this evening with witnesses. Those cases are very new. There’s not a lot, evidentiary, that we can share at this time. I can say that we are making good progress and can hopefully share some information soon.”

But while Cook noted that gang violence has risen in Alexandria since 2014, he urged caution in jumping to conclusions regarding the latest murder.

“We had one major gang crime in 2014,” said Cook. “So far in 2015, we’ve had seven ... but we’re not sure yet that they’re gang-motivated crimes.” Cook estimated that there’s anywhere between 150 and 200 active gang members living in Alexandria, but emphasized that this was mostly an educated guess. The estimate is based largely those arrested who self-identify or wear the tattoos of one gang or another. Cook described gang violence as a mobile problem.

“A lot of the violence is concentrated just south of us,” said Cook. “We haven’t seen as much violence in Alexandria .... We’ve had very serious and violent behavior by gangs in the region around us. A lot of felonies, a lot of assaults. The threat is ever present, because it can erupt at any point with a disagreement between the gangs.”

That eruption appears to have already started. Police had been searching the park for Eduard David Chandias Almendarez, who had disappeared there on Nov. 28, before he was found last Friday.

Earlier in November, Jose Luis Ferman was found at a playground in Beverly Park with severe neck and head injuries. During the discussion with City Council, Cook grouped these two murders together and said that the police are making progress. Not discussed were the unsolved murders of Leon Williams and Shakkan Elliot-Tibbs near the Braddock Road Metro earlier this year.

“We’ve had an uptick,” Cook said. “It tends to be cyclical, particularly when there’s a grievance between gang members. Of the previous five [gang-related crimes] that we had this year, four have been resolved and arrests have been made, one is still pending. We’ve done great work in trying to identify who those people are.”

But Alexandria’s diaspora of gangs is diverse, and finding witnesses and leads within gang culture isn’t easy. “We have just about every national gang represented in terms of residency,” said Cook. “We have more Hispanic gangs than other traditional gangs, but almost everyone is represented. That doesn’t mean all are active, but that people in city identify as part of those gangs.”

Joseph Regotti, Alexandria Gang Prevention and Intervention coordinator, noted that the best thing the city could do to curtail gang violence is social programs and constant community outreach.

Cook announced that a meeting is scheduled for Monday, Dec. 14 at 6:30 p.m. at the Cora Kelley Recreation Center gymnasium, to discuss the latest murder with the community.