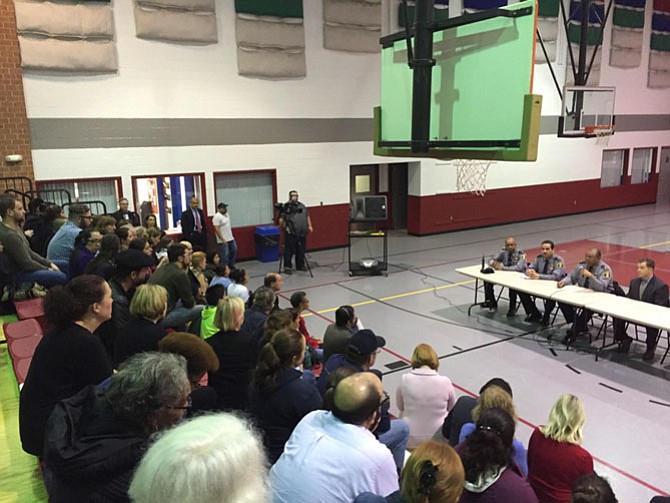 “We have increased our police presence in the greater community and in your community.”

Chief Earl Cook’s meeting with residents from the area near Four Mile Run, the site of Alexandria’s most recent of four unsolved murders, had a different tone from Cook’s presentation on the same topic to City Council last week. The murder of Eduardo David Chandias Almendarez isn’t an abstract problem facing the city; for residents attending the meeting at the Cora Kelly Recreation Center, it raised questions about local safety.

The police community meeting on Dec. 14 didn’t offer much by way of new information on Alexandria’s four unsolved murders, but Cook did reassure residents that the police were still keeping the city protected.

“We have increased our police presence in the greater community and in your community,” Cook told the audience. “Officers are out tonight and every day since the homicide. We ask everyone to keep due diligence. Fortunately… we’ve seen a drop in crime, but statistics aren’t what’s important when someone has lost their life.”

Without a suspect in custody, the police could still not confirm whether or not the homicide was gang motivated, but Cook did say that his “guesstimate” is that they were probably gang related.

“The gang problem is regional,” said Cook. “[These guys] are not that territorial and they move rapidly.”

Despite the limited information he could provide on the details of the homicide, Cook did stay to answer every question about procedure and respond to each of the concerns from citizens. The bleachers of the center’s gymnasium were full, and at least one-third of those assembled at the police community meeting were Spanish-speaking. An English-Spanish translator service was offered and frequently used. Adriana Schellhaas from Casa Chirilagua said many of the community’s parents attended the meeting.

“It was good to see the parents here,” said Schellhaas, though in the future she encouraged the police to break the meeting into smaller groups, partially to help the prospect of speaking up feel less daunting. “You hear unsafe things, and the fact that these [murders] were so close… the neighborhood has been quieter than usual.”

Residents in the local neighborhoods are still on edge, but say they feel safer.

“I appreciated that Chief [Cook] answered all of the questions respectfully,” said Aidan Bohlander. “It was a respectful, thorough, and thoughtful meeting. I generally feel safe.”

“It was very informative,” said Lucy Willis. “It gave the community a sense of what [the police] are doing.”

Willis has lived in Alexandria since 1976 and said the crime situation isn’t nearly as bad today as it was throughout the ‘80s.

“I feel safe today,” said Willis. “Considering what we had in the past, we don’t have a lot of crime.”

Willis and others at the meeting echoed a sentiment that had been shared at community meetings since the first homicide in early June in an affordable housing neighborhood, and warned citizens not to assume residents of affordable housing are involved in criminal activities. While Cook encouraged citizens to report suspicious activity, he also emphasized Willis’ point on uniting rather than dividing the local community.

“Don’t make assumptions about your neighbors,” said Cook. “Reach across the fence and talk to them.”