Jefferson Site: From Rejection to Approval 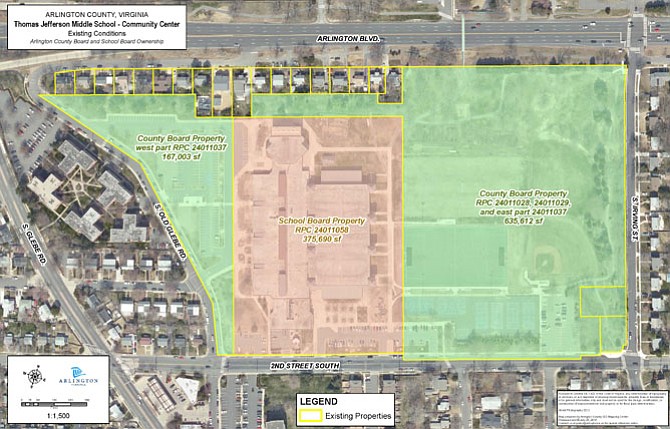 At its first 2015 meeting in January, the Arlington County Board voted not to approve Arlington Public Schools’ (APS) plan to build a new elementary school adjacent to the Thomas Jefferson Middle School. At the time, County Board Chair Mary Hynes said the schools had not presented a compelling enough argument to the surrounding neighborhood. But on Dec. 15, at the last meeting of 2015, the County Board unanimously accepted the same proposal.

Hynes said that the plan had initially been an “elegant solution” but that she had been dissuaded by the lack of support from the community. However, since the initial proposal, Hynes said she was happy with the work done by APS on engaging the community.

While the proposal had a few supporters in the audience, the majority of local residents were not as enthusiastic as Hynes had characterized them. Increased traffic congestion and the closure of park land were two of the most commonly cited problems from the new elementary school’s neighbors.

“We want our neighborhood to remain a fine place to live,” said Philip Rotondi, president of the board of directors Dominion Square Townhouse Association, “The traffic congestion situation must be mitigated.”

Rotondi said traffic had been cited as one of the primary concerns from the County Board when the proposal was initially brought forward in January, and that nothing had been done to fix the congestion.

“I’m not aware of any actions that we’ve taken in the interim,” said acting County Manager Mark Schwartz.

In addition to congestion, Rotondi and other speakers also noted that the new school would replace an existing parking lot and only further add to the parking shortage in the neighborhood.

“The truth of the matter is, every single place that we look at has major traffic issues,” said Hynes. We will struggle with parking … but as I look at this solution, what I see is the opportunity to take what is a parking lot now … and work collaboratively to try to figure out a way to address that parking issue.”

Many of the local residents lamented the loss of park land, though the current park land being considered for development is a parking lot and does not extend to any of the nearby green space. County Board member Walter Tejada asked for assurances that no trees would be torn down to make room for the school, which Schwartz confirmed.

“Why aren’t we building schools where the students are?” asked Cummings. “I appreciate the need for more school space, but fewer than 20 percent of Arlington residents have children in the schools. Those of us who use the green space at the parks remain very concerned that, during construction, we would lose access to those facilities.”

Despite the unanimous approval, there were still misgivings from the County Board, many of whom recognized that the solution was not ideal.

“Building on what is technically county park land does set an uncomfortable precedent,” said County Board member John Vihstadt, “Yet, the need for a new south Arlington school has never been more urgent. There is unlikely to be a perfect space for just about anything anymore.”