The following is a look at some of the top moments in McLean/Great Falls high school sports from the year 2015.

Langley Boys’ Soccer Wins It All

The Langley boys’ soccer team won the 2015 6A state championship.

The Saxons defeated Madison 2-0 in the 6A state final on June 13 at Robinson Secondary School, with goals from Jacob Labovitz and Cameron Bacso. It was the fourth time the Saxons beat the Warhawks during the season.

Langley finished the year with a 20-1-1 record and went unbeaten during its final 18 matches. Along with a state championship, the Saxons took home Conference 6 and 6A North region titles, as well. 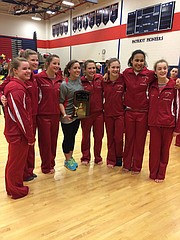 The McLean gymnastics team took home a trio of titles during the 2015 season, highlighted by winning the 6A state championship on Feb. 20 at Patriot High School.

After finishing state runner-up the year before, the Highlanders earned the program’s first state title with a score of 145, finishing ahead of second-place Stafford (144.75) by a quarter-point. McLean became the first Fairfax County program to win the big school state gymnastics championship since Langley won it all in 2004.

Lizzy Brown-Kaiser scored 9.15 or better in each event, with her best effort coming on floor (9.425).

McLean’s Conor Grammes, then a junior, won the 152-pound 6A state wrestling title in 2015.

Conor Grammes is a standout middle infielder for the McLean baseball team and is committed to play at Xavier University.

Grammes’ most memorable performance of 2015, however, occurred on a wrestling mat.

Grammes won the 152-pound 6A state championship, defeating South County’s Jacob Wassif with a 5-2 decision on Feb. 20 at Robinson Secondary School. His effort helped the Highlanders finish seventh as a team.

Grammes defeated Herndon’s Samuel Milligan in the semifinals with a 6-3 decision.

The Langley volleyball team won the 6A North region championship in 2015.

The Langley volleyball program won its second region championship in three years with a four-set victory over Madison on Nov. 14.

This time, however, the Saxons failed to follow their region title with a state crown.

Langley, which won the 2013 state title, faced Madison for the fifth time this season in the 6A state final on Nov. 20. The Saxons won the first set and two of the first three, but fell to the Warhawks in five sets at VCU’s Siegel Center in Richmond on Nov. 20.

Langley finished the season with a 25-6 record.

The Langley girls’ swim and dive team won the 2015 state championship with a score of 206, beating Oakton by two points.

It was the Saxons’ sixth state title since 1998.