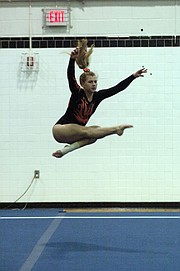 Hayfield’s Molly Overstreet earned a berth in the 6A North region meet as an all-around competitor.

Hayfield gymnast Molly Overstreet is a two-time state champion, but her junior year has been marred by lower-back pain.

Years of competing has taken a toll on Overstreet’s body. On a scale of 1-10, Overstreet said her back pain is a 6 during meets, and a constant 3 or 4 during everyday life.

Overstreet captured a three-way share of the state vault championship as a freshman in 2013. The following year, she won the state bars title with a VHSL-record score of 9.925. Due to back pain, however, she spent most of the 2014-15 season unable to give her best effort.

“I’ve definitely watered down most of my routines for the preseason,” she said.

On Feb. 2, Overstreet competed at the Conference 6 championship meet at McLean High School. The result was a conference bars title and a berth in the 6A North region meet as an all-around competitor.

She finished eighth in the all-around with a total of 35.675.

Overstreet said she’d like to add to her bar routine for the 6A North region meet, scheduled for Feb. 11 at Lake Braddock Secondary School. 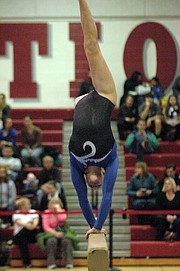 After last year’s state-record performance on bars, does Overstreet feel pressure to perform at a high level?

“Definitely, yes,” Overstreet said. “I just try to do my best and have fun, but there always will be that pressure because I was the state champ.”

Joining Overstreet as an all-around gymnast at regionals will be Fairfax senior Rachel Barborek, who placed fourth at the Conference 6 meet with a total of 36.25. She won the conference beam championship (9.425), placed second on floor (9.5), finished 11th on vault (9.025) and tied for 12th on bars (8.3).

Washington-Lee senior Sophie Hatcher won the all-around title with a score of 37.625.

“It feels so good because at all my other meets, I didn’t ever hit all four [events] --- I always had some mistake --- but today I hit all four and I’m really happy,” she said. “This is the best meet I’ve ever had in all my four years of high school.”

“It’s a really great feeling because this is our senior year and there was a lot of pressure to keep our conference championship title [streak],”

Highlanders senior Lizzy Brown-Kaiser said, “so it feels great to fulfill that.”