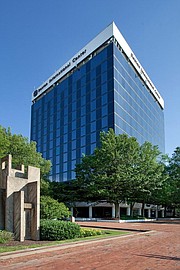 Reston Heights includes The Mercer Condos, The Westin Reston Heights Hotel and office space. The area is about to undergo an expansion that will add about 400 more residential units and 95,000 square feet of retail to the development. AREP decided to pursue 11800 Sunrise in part because of the opportunity to be part of the Reston Heights mixed-use redevelopment. AREP made the acquisition through its American Real Estate Partners Strategic Office Fund.

“Reston International Center presents American Real Estate Partners with a remarkable opportunity to renovate and reposition an iconic asset at the epicenter of one of the most vital mixed-use communities being developed along the Toll Road,” American Real Estate Partners President Brian Katz said in a statement. “Reston, fueled by the coming completion of the Silver Line stations through Fairfax and Loudoun Counties, will continue to be a magnet for growing companies that value access to highly educated employees, exceptional transportation options and all of the amenities and infrastructure of Reston Heights and nearby Reston Town Center.”