Caring for the Potomac
Votes

Caring for the Potomac

Developers have major role in maintaining and improving river’s health 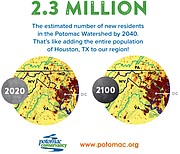 The Lincoln Memorial as seen from across the Potomac River.

The Potomac River at Great Falls

In its recent report, the Potomac Conservancy shows that there's still much work to be done to safeguard the Potomac River from pollution and urban sprawl, but there are areas of encouragement.

Development of rural areas potentially can wreak havoc on watersheds and rivers because grassy land helps to absorb and slow the rate of storm water rushing into a river and helps keep soil intact, and paving over pervious surfaces leads to soil erosion, silt-clogged rivers and depleted oxygen levels which can kill ecosystems.

Building Metro through Tysons could have been a disaster, but the developers worked with the community to take ecological matters into consideration, said Stewart Schwartz, executive director of the Coalition for Smarter Growth.

"The Potomac is a treasure for our region," Schwartz said. "It's an amazing natural asset to this region that helps attract people to live and work here."

It's also the drinking water supply for most of the region, said Stella Koch, the Virginia conservation associate with the Audubon Naturalist Society. Fairfax Water, the Washington Aqueduct and the Washington Suburban Sanitary Commission all draw from the river in part or in full, in addition to portions of Loudoun and Prince William counties. That's an estimated five million people, she said.

There was great potential for problems with all the construction in Tysons, Koch and Schwartz note.

"Tysons had 75 percent impervious surface, and 70 percent of Tysons had no stormwater collection facilities," Koch said.

The damage done is noticeable, she said. Generations ago, the river was so clear boaters could look down and see grasses growing in healthy soil under the water, but now some spots are dangerously high in nitrogen and phosphates from fertilizers.

But progress is being made, and just as it took years for pollution to occur, it will take years to correct, she said.

The Potomac Conservancy's report does warn that there's the potential for loss of healthy forests in the areas surrounding the river, and aging sewer infrastructure could create perilous situations if not addressed quickly.

"Aging sewer and water infrastructure is a major source of pollution for today's urban waterways," the report states. "In an average year, leaks from burst pipes and combined sewer overflows dump 600 million gallons of diluted raw sewage into the Potomac river and 1.5 billion gallons into the Anacostia. This perennial problem exposes the river — and anyone who comes into contact with it — to dangerous pathogens and bacteria."

The report also says that current population growth models predict the heavily populated areas along the Potomac, including Washington, Fairfax, Arlington and Montgomery counties and the cities of Alexandria and Rockville, expanding by 2.3 million by 2040, the equivalent of Houston, Texas.

To help support the health of the river, the D.C. Water and Sewer Authority and the EPA have partnered in the Clean Rivers Project to reduce sewer overflow, a $2.6 billion effort, according to the report. The development in Tysons Corner is praised for a "detailed, city-wide smart planning project" that will "help reduce polluted urban runoff by increasing the use of permeable pavement and rain gardens."

Still, residents need to do their part to help protect the river, Belin said. If possible, homeowners should consider putting rain barrels under the downspouts of their gutter systems in addition to taking care to clean up oil, gasoline or other chemical spills on impervious surfaces like paved driveways. He also recommended going easy on lawn fertilizers and other treatments, as those also can choke the oxygen out of the river and, eventually, the Chesapeake Bay, resulting in dead zones devoid of plant and animal life.

Governments in Fairfax and Montgomery counties are investing heavily in new infrastructure to help mitigate storms rushing over impervious surface, and their dedication should be applauded, Schwartz said. Montgomery County has taken steps to protect 10 Mile Creek and promote urban tree canopy, for example.

And for those who ask why the Potomac is worth protecting and keeping healthy?

"We all want to drink clean water, for ourselves and for our children," Schwartz said. "We also like to have healthy streams to kayak or play around in. We can't have that if you're polluting the river."