‘The Sidewalk Will Increase Safety’
Votes

‘The Sidewalk Will Increase Safety’ 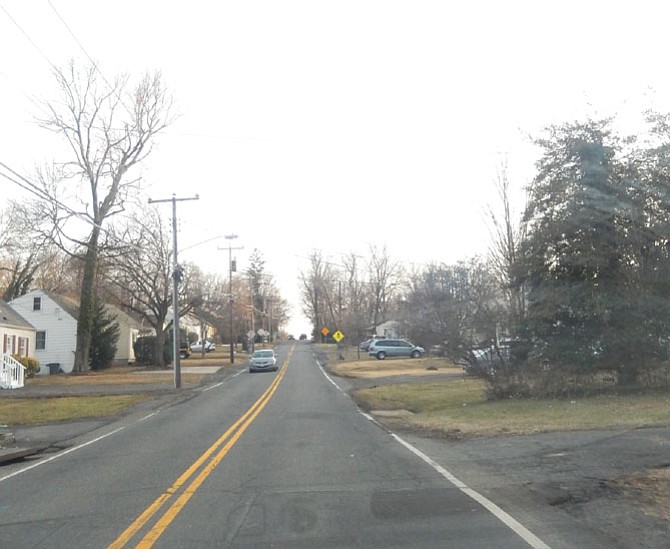 A car driving on Roberts Road toward Sager Avenue. Photo by Bonnie Hobbs. 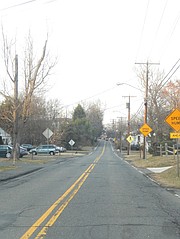 Pending receipt of the necessary funds, the west side of Roberts Road in Fairfax – between Main Street and Sager Avenue – will be getting a new sidewalk, curb and gutter. The Fairfax City Council approved this action at its Jan. 13 meeting.

Not all the residents are happy about it and not all the Council members are in agreement. But in the end, it’s believed that the project will make the city more walkable and this portion of Roberts Road safer.

“The cost, including right of way/easement acquisition and construction, will be approximately $800,000,” said Transportation Director Wendy Block Sanford. “The city has applied for FY ’16 Revenue Sharing funds to fund [the work] and we’ll know whether we’re awarded the funds by May.”

Actually, the city has been considering this project for quite awhile – especially since the Council members first realized that there wasn’t consensus among the street’s residents. At their Nov. 4, 2014 work session, Sanford noted some positive resident feedback and said city staff recommended proceeding with the sidewalk’s design and construction.

“It does pit neighbor against neighbor – it’s very controversial,” said Mayor Scott Silverthorne. “So we should at least try to get more buy-in [from the residents].” He suggested one more round of outreach to the ones the city hadn’t yet heard from and to those in opposition. So staff mailed out a letter with project information, a survey and a postage-paid, return envelope to the households that hadn’t commented on the project.

THE ISSUE wasn’t on the Council’s Dec. 9 meeting agenda, but Kathryn Kime – who’s lived on Roberts since 2005 – addressed the members on behalf of her family and neighbors. She asked the city to consider an alternative design – completely closing Roberts to northbound traffic between Main and Sager – to improve pedestrian safety.

“Roberts has little to no shoulders and narrow travel lanes, but one of the highest concentrations of homes in the city,” said Kime. “[Staff’s] proposed design doesn’t reduce volume and speed along Roberts.” She further explained that, by making that section one-way, residents wouldn’t have to give up part of their property for easements.

Then at the Council’s Jan. 13 meeting, Sanford presented the survey results, along with all the written comments received. She said 18 households responded and 10 didn’t. City staff also met on-site with two of the households against the work. Altogether, 25 households support the project, five don’t and 10 didn’t comment. Sanford noted that the five against the project are on the west side (sidewalk side) of the road.

A public list of the comments didn’t have people’s names attached to them, but a small sampling is as follows: One person, who sided with Kime, wrote that the plan “seems to impact the residents of the neighborhood for the benefit of the people who commute through. We would not have purchased our house without the existing buffer we will lose. We will lose tens of thousands of dollars of value off our property when we sell.”

Yet many residents were in favor of the project. “The street is very busy and continues to have an issue with drivers speeding on the road,” wrote one of them. “It is very dangerous to walk on the street, and a number of children wait for the bus from Sager Avenue to Main Street. A sidewalk would help with the safety of students walking to the bus, students walking to George Mason [University] and pedestrian traffic walking to downtown.”

Another person also expressed excitement about having a sidewalk, writing that “Roberts is a very highly traveled road, with truly no safe way for folks to walk on that stretch. I see one couple walking with their baby in a stroller down Roberts, and it scares me.” Noting existing flooding problems, as well, the writer further said, “I also understand this project will help address the water issue many of us have here on Roberts.”

AT THE MEETING, Councilman Jeff Greenfield made the motion to proceed with the design of the new sidewalk, curb and gutter – contingent upon receipt of the funds – and Councilman David Meyer seconded. Loftus, however, sided with the plan’s opponents.

“Other options might be better and even include a bike lane and better traffic flow,” she said. “And most important, the City would take land from homeowners who don’t want to give it up.”

But the rest of the Council members disagreed with her. “We pride ourselves on being a walkable city, and I believe the construction of this sidewalk will further enhance that aim,” said Councilwoman Janice Miller. “So I support it.”

Schmidt said she, too, favored it because “the sidewalk will increase safety.” The Council then voted 5-1, with just Loftus in opposition, to move forward with the Roberts Road improvements.