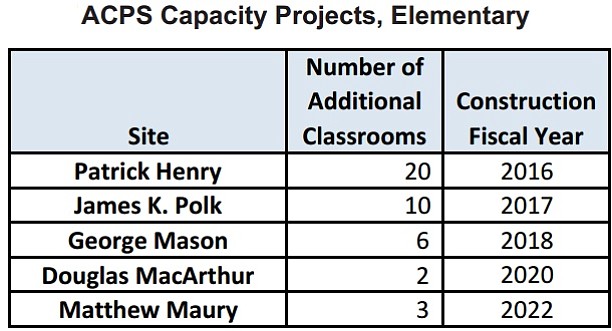 For parents at George Mason Elementary School, all of the talk of modernization and improvements isn’t resonating. According to Alexandria City Public Schools Superintendent Alvin Crawley, the school is transitioning from a quick fix mentality to a 10-year modernization process, but local parents at a School Board public hearing on Jan. 22 criticized the superintendent’s decision to move George Mason Elementary down on the modernization priority list. On Feb. 13, the Superintendent acknowledged the criticisms but said that his office had to look at the bigger picture and see what was best for the schools.

“Our community, George Mason, is very disappointed to hear that we were moved from being first to go through this process to number three,” said Marie Randall, a parent at George Mason Elementary. “We have been moved behind Douglas MacArthur and Cora Kelly, and according to Dr. Crawley’s timeline we would not start our project until 2022 or 2023. Since nothing has changed with the condition of our building and we still have the least amount of space per student than any other school in ACPS, we are disappointed to think that we are being moved simply because our community isn’t amenable to expanding our school even though we have increased our school size by 35 percent over the last six years.”

“We seem to be in a very unfortunate popularity contest of ‘which school is worse’,” said Randall. “However, I think that just highlights the neglect that has happened at both schools over the years.”

Built in 1939, George Mason Elementary is also one of the school system’s oldest schools. The last major classroom addition was in 1949, and a multi-purpose room was added in 1961. 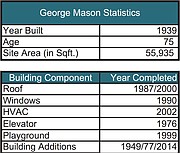 “George Mason is in major disrepair,” said Cameron. “[There are] leaking single pane windows with rotted sills, roofing issues, water issues with walls that never dry, rodent issues, not enough bathrooms and inadequate plumbing. Some rooms cannot be equipped with the latest technology because of the existing infrastructure, and this is just the tip of the iceberg.”

“George Mason Elementary School is an old building with great character, but it needs some significant and major modernization now,” said Cameron. “You all know it well enough that you placed us first on the list for modernization and expansion. Our modernization is of the highest priority … Now we’ve been bumped years further along.”

Cameron said that while the school desperately needed modernization, it’s location kept it from expanding. George Mason’s property is abutted by residential homes, a city park, a church, and a busy street jammed every morning with preschoolers and buses. Due to neighborhood constraints, the George Mason community vocally disapproved of expansion. Cameron and Randall both said they were concerned that the reason George Mason was pushed lower on the list. According to Crawley, this is absolutely true.

“At MacArthur, Cora Kelly, and George Mason, we’re not only looking at the condition, but we have to keep adding capacity in mind,” said Crawley. “George Mason was initially first, but there was discussion on the constraints that would preclude us from expanding capacity. We made the decision to add capacity at MacArthur, not at George Mason.”

“Would we have wanted to do more? Yes,” said Crawley, “but we’ve set a realistic agenda with the demand that is there.”

Clarence Stukes, ACPS chief operations officer, said that the school modernization will start with a full feasibility study at each school that examines the physical structure of the building, historically the number of work orders at the site, and bring together a modernization committee with ACPS, school staff, and parents to set priorities for the school.

In a series of questions submitted to Stukes by School Board member Patricia Hennig, she asked whether the modernization process in the CIP would reduce the maintenance costs in the operating budget.

“No, the ‘maintain until building renovation/replacement’ line in the CIP will fund unanticipated capital projects needed to keep buildings functioning until modernization,” Stukes answered. “Funds in the operating budget cover routine maintenance and minor repairs.”

But according to Randall, none of these modernizations will matter if the schools can’t retain their staff.

“Another priority for the school board is to retain great staff,” said Randall. “Our fabulous staff at George Mason has been working in substandard conditions. Our staff, including our principal, was ecstatic to hear that George Mason was the first priority project and had great ideas about what they’d like to see in a modern classroom. They are also extremely disappointed with this news and we are disappointed for them. No one wants to work in a failing work space.”

Other modernization projects included renovations of school sports fields. Each of the middle schools has money in the budget for tennis courts for an average of $35,000. According to Crawley, these funds are not going to construction of new courts but into resurfacing and general repairs. The CIP does not include the funding to football field lights at T.C. Williams High School, but according to Stukes that’s a cost that will likely be evaluated and included in the yearly adjustments at a later date.

Fifty million dollars was also set aside for a new school site to be determined in fiscal year 2019.

“We are looking at enrollment, and we need capacity at elementary, middle and high school levels,” said Crawley. “We’re adding capacity now, but we need to add significant capacity to middle schools.”

Crawley estimated that the new school would have a 1,200 student capacity.

Stukes also emphasized that while the CIP covers a 10-year period, it is reinstituted each year with flexible discussions on project funding in those years.

“The capital program is the best estimate of our needs now,” said Stukes, “but there needs to be some flexibility.”