‘You Start with a Box of Metal’
Votes

‘You Start with a Box of Metal’ 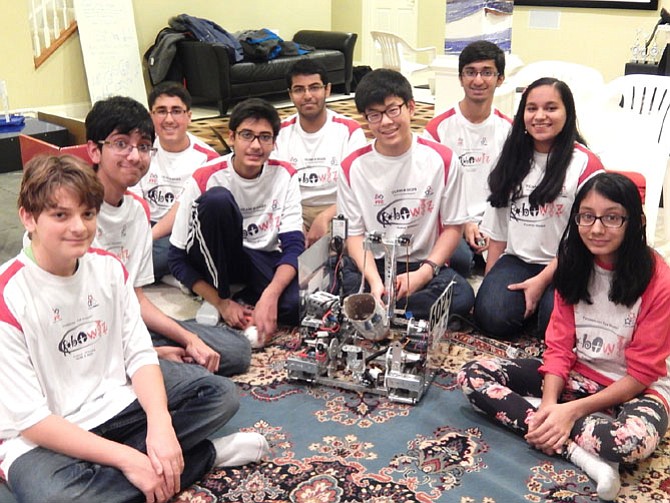 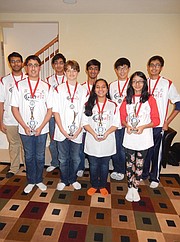 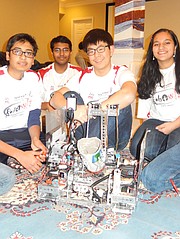 With their robot are (from left) Josal Patel, Abhishek Mishra, Jami Park and Radhika Agrawal.

It’s a big deal when a team, academic or athletic, reaches the state championships. But it’s even more impressive when that team does it in two, different states.

Meet team Robowiz – 10 local students who’ve reached that level in both Virginia and Maryland. The eight boys and two girls live in Centreville, Chantilly and Fairfax and are in grades eight through 10.

“Over the last eight years, my co-coaches Jugnu Agrawal and Ashish Kulkarni and I have seen unsure, tentative and sometimes shy elementary-schoolers turn into bright, young, patient and articulate high-schoolers,” said head coach Suprotik Ghose. “They help other teams at tournaments, yet compete professionally in the robot matches.”

The teammates meet a few times a week at Kulkarni’s Fair Lakes home to work on their robot and prepare for competition. They vie under the auspices of FIRST (For Inspiration and Recognition of Science and Technology), which encourages young people to be science and technology leaders, plus well-rounded and self-confident.

“What makes it special was that the kids were aware of a rule supposedly preventing them from winning the Inspire award twice – they had also won Inspire in Maryland, a couple weeks earlier,” said Ghose. “They immediately told the tournament director, but the Virginia FTC hadn’t faced this situation before.”

After the director spoke with USFIRST national headquarters, they allowed Robowiz to keep both the Inspire and winning-captain alliance awards since it won them in separate states – with the understanding that it won’t be able to win Inspire at both state tournaments.

“According to USFIRST, this was the first time a team had won the Inspire award in the same season in two, different states,” said Ghose. “So I give a big shout-out to the team members for their honesty, dedication and hard work.”

Each year, FTC has a new challenge, and this year’s was called the Cascade Effect. Games last 2 minutes, 30 seconds, with four teams in each round; two teams vie against two others. “You’re allied with another team for one round of the five-round competition,” explained Chantilly’s Jami Park, a sophomore at TJ (Thomas Jefferson High School for Science and Technology). “There are different alliances in each round.”

In the challenge, each team’s robot had to pick up Wiffle balls and golf balls from the ground and get them into its tube, or goal. Robowiz’s robot has three goals, 30, 60 and 90 centimeters tall each. And, said TJ classmate Adarsh Kulkarni, of Fair Lakes, “The way to earn the most points was to move the rolling goal to a ramp. Scoring is based on the height of the balls you place inside the goal.”

During the first 30 seconds of the 2.5-minute round, the robot is preprogrammed to move on its own. “The second two minutes are driver-controlled,” said Park.

“The last 30 seconds of that two minutes, you put the balls into the goal,” added TJ’s Cedric Bernard of Centreville’s Hampton Forest community. “It’s a Plexiglas tower [in the center of the robot].”

On Jan. 18 in Potomac, Md., Robowiz came in first out of 27 teams, and did the same thing Jan. 31 in Orange County against 25 other teams. Both times, it won the Overall Champions, or Inspire, award for being the best team, plus its community service, engineering notebook and overall demeanor – called “gracious professionalism” – at each tournament.

Radhika Agrawal, a TJ sophomore from Fair Oaks, said Robowiz’s engineering notebook contained the team’s planning, events attended, photos, fun facts about the members and information about how they built their robot. “We started in August and finished the majority of it in November,” she said. They then overhauled it over the Thanksgiving and Christmas breaks.

“We changed our entire game strategy to focus on getting rolling goals, instead of getting the balls,” said Agrawal. That’s because each rolling goal, moved to different places, is worth 30 points. One of just two girls on the team, she said, “We all pitch in equally and work well together. We play off each other’s strengths and have grown closer since the team began.”

THE OTHER GIRL, Frost Middle eighth-grader Anushka Jain of Fair Oaks, said she was initially shy when she joined the team, but “they let me fit in on the first day. It’s fun to tackle the challenges together and design the parts of the robot, like the chassis.”

“We do CAD, computer-aided design, to make sure it’ll work before wasting time and energy to build it,” added Agrawal. “I started robotics in fifth grade and it sparked a passion in me. I like seeing how things come together and work. You start with a box of metal parts and build something that moves and can be programmed to do various things. And with FIRST, you get to network and talk with other people at the tournaments and get a real-world experience.”

TJ sophomore Abhishek Mishra of Little Rocky Run said the team worked to make its robot more reliable and move easier. “I think we’ll do well at States because we have a strong robot, nice community outreach and a well-made engineering notebook,” he said. “We’re well-rounded, which is what the judges look for.”

Classmate Shomik Ghose of Fair Lakes said robotics doesn’t require hand-eye coordination. “It’s more of a mental sport, and I enjoy learning cool things with people I like,” he said. “We have fun as a team and mesh well together. And we used GoPro and cell-phone cameras to see what was going wrong with our robot and how to fix it.”

Another classmate, Josal Patel of Fairfax, scouts the other teams to learn about their skills and determine whether they’d make good alliances for Robowiz during a competition – and also in case they become opponents. “I watch every match in the tournaments, analyze the teams and write down what they’re good at and what they struggle with,” he said. “So I’m able to pick the best teams that could help us win the most points.”

TJ freshman Saarthak Sethi of Chantilly said all the Robowiz teammates love working on the robot, so it’s tough breaking up the tasks. But it works out because “all of us are good friends who come together to work for the same purpose that we’re passionate about.”

“USFIRST has provided these future technologists a superb platform to learn the scientific and engineering process,” added Coach Ghose. “When one sees all the young, determined and hardworking participants at the tournaments, it provides ample assurance that the future of our country is in extremely capable hands.”