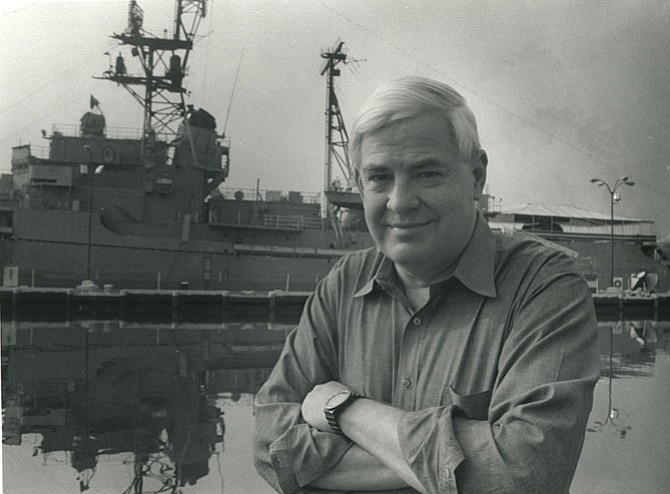 Charles Clinton Thompson II, 72, of McLean died Dec. 15, 2014 at Perry Point Veteran’s Medical Center in Perry Point, Md., with his wife and sons by his side. Thompson, known as “Charlie,” was an Emmy award-winning investigative reporter for “60 Minutes,” author, and decorated Naval officer who served bravely in Vietnam.

His funeral was held on Jan. 3 at the Cathedral of the Immaculate Conception in Memphis Tenn., with burial at Mount Zion Cemetery near Medina.

A Tennessee native, Thompson graduated from Central High School in Memphis. At the University of Tennessee in Knoxville he served as an ROTC officer and was a member of the Kappa Sigma fraternity. He transferred to Memphis State University after his junior year and worked as a reporter for the Memphis Commercial-Appeal. He graduated from Memphis State with a degree in journalism.

After college Thompson volunteered for military service and enrolled in the United States Navy Officer Candidate School in Newport, R.I. He served two tours of duty in Vietnam. Thompson spent his first combat tour working in aviation ordnance and gunnery on the USS Oriskany, an Essex-class aircraft carrier nicknamed the “Mighty O.”

During his second tour, Charlie was a naval gunfire spotter, artillery observer and forward air controller with the First Air Naval Gunfire Liaison Company (Fleet Marines Pacific). His forward observer position was perilous in scope, requiring he fly low over enemy territory in a tiny fixed wing Cessna. Surrounded by enemy fire, he would radio enemy positions to various Navy vessels, which would in turn unleash devastating salvos upon the Viet Cong guerrilla and North Vietnamese forces on the ground.

According to a service memo, “Lieutenant Thompson found it necessary on most occasions to take part in flights at altitudes such that the danger from hostile ground fire was always present.”

“Much of the Naval gunfire spotting,” according to his service record, “was done from an 0-1 Bird Dog aircraft, flying overhead, selecting enemy targets, coordinating, requesting and adjusting fires on the enemy, and then assessing and reporting the results.”

“Charlie flew more than 300 missions,” said Tom Green, who served with Thompson in Vietnam. “He went up more than anyone else I knew over there. Sometimes, if there was a lot of action, he would go up three times in one day.”

“Lieutenant Thompson’s courage, conduct and dedication to duty while participating in these hazardous aerial flights,” the Navy document states, “were in keeping with the highest traditions of the United States Naval Service.”

Stationed in Nha Trang during his second tour, the young officer’s orders often carried him into the jungles where he coordinated and controlled Naval gunfire while working closely with U.S. ground troops and other “free world forces” serving in Vietnam. His time on the ground, where he was routinely exposed to the defoliant Agent Orange, would lead to devastating medical consequences later in life.

During his tenure at the Tennessean, Thompson wrote a three-part series about a small town sheriff who walked tall and carried a big stick. The lawman’s name was Buford Pusser. Thompson described Pusser as a “six-foot-six monument of a man … who once took on six bullies in a bar fight and beat them single-handedly.”

A publisher approached Thompson after the series ran, but he turned down a book deal, believing no one would be interested in a hard-living small town cop with a penchant for blowing up moonshine stills. Pusser’s life was later immortalized in the 1973 film “Walking Tall” which starred Joe Don Baker.

Not long after the Pusser series, Thompson accepted a position as an investigative reporter with WJXT-TV, a Post-Newsweek station in Jacksonville, Fla. The medium was new to him, but as Thompson wryly recalled, “I had figured out how to blow things up in Vietnam, so, in comparison, how hard could television be?”

He was fired after he exposed several of the station’s leading advertisers for dumping chemicals into the St. John’s River. The incident might have been the end of his television career, but Time Magazine picked up the story. Other news outfits actively recruited the brash young journalist.

During the first half of the 1970s Thompson worked for CBS News, transferring frequently, with his young family, to bureaus in New York, Atlanta and Los Angeles before settling in the Washington, D.C. area.

In 1978 he became a founding producer of the news magazine 20/20. During his time at the ABC program Thompson frequently worked with investigative reporter Geraldo Rivera and was credited as senior producer on many news documentaries.

Thompson left 20/20 in 1989 to join the staff of 60 Minutes where he worked alongside legendary newsman Mike Wallace. Thompson developed a reputation as being the go to guy for military stories. He was awarded an Emmy in 1991 for a segment he produced on mustard gas.

A workhorse in and out of the office, Thompson, and his brother-in-law Jim Cole, published a book on the last days of Elvis Presley in 1992. The book, which contained an exclusive copy of Presley’s autopsy report, revealed the true cause of Presley’s death. The book was a runner up for the 1992 Edgar Allan Poe Award from the Mystery Writers of America.

“Charlie was a newshound in the best sense of the word,” said Cole, his co-author on the Elvis book. “If you asked him to name the most important story he’d ever covered he would always pick the one he was working on at that particular moment.” Thompson’s second book, “A Glimpse of Hell: The Explosion on the USS Iowa and Its Cover-Up,” was developed as a made-for- TV movie starring James Caan.

IN THE MID 1990s, at the peak of his career, Thompson’s health began to fail. Decades earlier, Thompson had walked away from Vietnam seemingly unscathed, but exposure to Agent Orange had left its mark. After a rare blood disorder left him incapacitated, Thompson left “60 Minutes.” He began to suffer from PTSD and cancer. He survived a liver transplant only to contract Parkinson’s disease. But even in failing health he helped renowned journalist Simeon Booker write a book about his career and life as a black reporter during the civil rights era in the South. Booker’s autobiography, "Shocking the Conscience," was published last year.

Survivors include his wife, Betty Thompson of McLean; sons, Cole Thompson of New York, and Shannon Thompson, of New Jersey; daughters-in-law, Marcela and Kristine and grandchildren Finn and Luke. His son Owen was stricken with dystonia and later died in 2011.

The family requests that any donations be made to the Southern Poverty Law Center, http://www.splcenter.org/ or Scripps Research Institute for Parkinson’s Disease, https://support.scripps.edu/parkinsons/