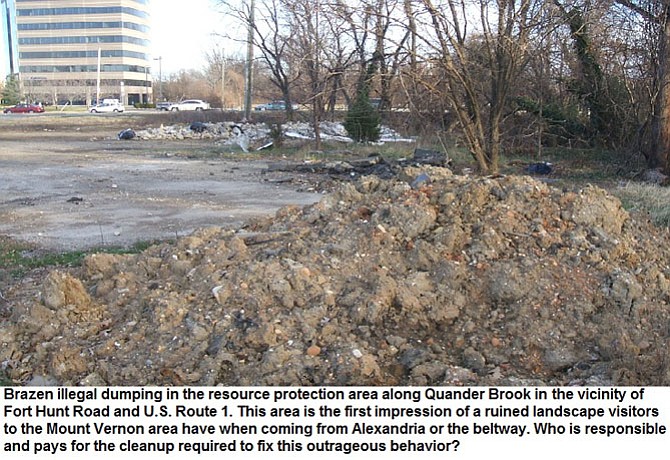 By By Martin Tillett

In a watershed, it is the tremendous diversity of life that makes it work. There is a trade-off when human intervention changes the way nature works. We have disconnected the water systems, the patterns of water in the landscape to which plant and animal life communities have adapted over millennia. Headwater streams are eliminated altogether and buried in drainage pipes or flow through concrete channels. On the banks of Quander Brook, even when we see trees all around us, the forest that once characterized the area is mostly gone because the fragmentation of the original forest has altered species composition allowing alien species to invade and expand at the expense of native species. The Quander Brook watershed is on the verge of dying. Why is there not an audible, concerted, powerful outcry against the ugliness and destruction of this once graceful natural landscape? 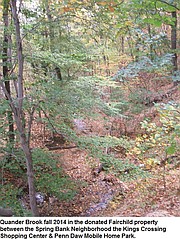 It has been the urge of the people inhabiting this watershed to build, to make nature produce money, to manipulate natural forces to our presumed advantage claiming that we are improving the land. We have evidence that doing so has left us a ruined landscape by failing to acknowledge that we owe our being to the interaction of those natural forces we cannot entirely control. Have we realized too late that nature’s complexity, its diversity operates to our benefit?

Competing visions of the future have given us this dilemma. One path continues the status quo by projecting the same patterns of development accommodating the march of low-density, auto dependent, sprawling growth, perpetuating our irresponsible patterns of waste and consumption; and witnessing the decline in the bonds of community and the quality of our living conditions.

The alternative vision is a future in which land is consumed sparingly, landscapes are cherished, even restored and communities are compact, vibrant and green. These are places that have much to offer in social, cultural and recreational activity, where there is a feeling of community, an active civic life and a concern for social justice. In these communities, many transportation options including public transit, bicycles and walking exist with the automobile thus enhancing fundamental human mobility and freedom. The economic base in these communities is viable as well as environmentally and socially restorative. The vision of place focuses on both the ecological and the social, where quantity of consumption is replaced with a quality of relationships. It is about creating places of enduring value that citizens can be proud of and not ashamed to leave their descendants.

In the Sept. 28, 1995 issue of the Mount Vernon Gazette, Andrew Macdonald wrote a weekly column called Earth Watch Alexandria. This article was the first written about Quander Brook after joining me for a walk along the banks of the then unnamed stream in the Spring Bank neighborhood and observing the plight of this watershed. We were of a like mind agreeing that the remaining remnants of natural beauty in this part of Mount Vernon ought to be saved.

The author is a Mount Vernon resident since 1981. A retired science educator from Prince George's County Public Schools, he taught K-12 science at the Howard B. Owens Science Center in Greenbelt, Md., as well as community college, university and adult education classes in natural history, physical geology, ecology and environmental science.

In the Sept. 10, 1998 Mount Vernon Gazette, staff writer Steve Hunt wrote an article about how residents in the neighborhoods around the Lamond property aren’t the only ones in Mount Vernon who are hoping to prevent development of green space which they would rather see turned into a park. The Spring Bank Community Association formed by reaching out to residents to draw their attention to the unnamed stream in their neighborhood and its potential as a community asset by becoming parkland. The Spring Bank Community Association named the stream Quander Brook and was supported by a resolution passed by the Mount Vernon Council of Citizens Associations.

In April 2006, residents of the Spring Bank Community formed Friends of Quander Brook and sponsored the first cleanup effort that resulted in the removal of 2.62 tons of trash from Quander Brook.

In the June 26, 2006 issue of the Mount Vernon Gazette writer Chuck Hagee wrote in an article that a consensus was reached on June 12 when the Spring Bank Community Association voted overwhelmingly to support the latest plans for the Kings Crossing Development that included a community park surrounding Quander Brook. 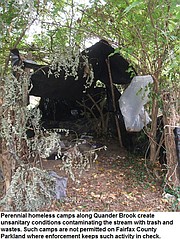 In 2008 The Mount Vernon Council of Citizens Associations passed a resolution for developing a passive public nature park in the Spring Bank Community to protect and conserve Quander Brook.

In the Oct. 8, 2009 issue of the Mount Vernon Gazette writer Gerald A. Fill wrote about Elizabeth Fairchild donating 8.5 acres of land to Fairfax County in the Spring Bank neighborhood for the expressed purpose of becoming a park. Board of Supervisors Chairman Sharon Bulova said, “Mrs. Fairchild’s generous donation contributes greatly to the quality of the environment.” Mount Vernon District Supervisor Gerry Hyland said, “This land will provide a place for children to play and families to gather and it will also provide the county staff and the board an opportunity to use it as a neighborhood improvement model to hopefully be replicated elsewhere in the county.”

During 2010, Spring Bank residents served for a year on the Belle Haven Watershed Management Plan and on Jan. 11, 2011 the management plan was adopted by the Board of Supervisors. The plan included projects on the donated Fairchild land that would improve conditions in the Quander Brook watershed.

On the Fairfax County website on storm water improvement projects are the 21 identified county watersheds at http://www.fairfaxcounty.gov/dpwes/stormwater/projects/project_list.htm Not a single project has been completed in the Belle Haven watershed with only one minor project in the planning process that does not involve Quander Brook. Many listed watersheds on this site have numerous completed projects including stream restorations and many other projects in planning stages. Spring Bank residents think it is time for planning some real projects benefitting Quander Brook.

When seeking the transfer of the donated Fairchild property to the Fairfax County Park Authority (FCPA) the community is told no because there are issues over public access, usability, financial liabilities, and the FCPA focus is on active use like playing fields and passive use is not a high priority.

The Spring Bank Community believes that none of the issues listed by the Fairfax County Park Authority (FCPA) are insurmountable and feels that the FCPA should engage directly with community representatives and stakeholders to seek out solutions and involve the viewpoints of everyone in public debate which has long been the Mount Vernon way to solve problems.

How did this happen to us? Are we allowing agencies that claim impotence towards resolving these issues to disempower us and just let the streams die of this disease? Do we let this happen, imagining that it is inevitable, failing to question, failing to find the resources for action, failing to join others who seek exemplary change — toward a more participatory democracy, seeking more green infrastructure planning? Will we content ourselves instead with piddling efforts that do not really count and only prolong the disease instead of curing it? Do we let this happen — though we have the power to redeem ourselves as one of a myriad extraordinary species of life with which we share this amazing planet Earth?