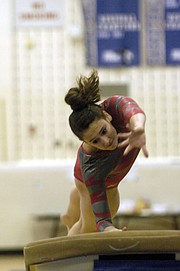 The McLean gymnastics team has produced a run of success in recent years, including a state runner-up finish in 2014.

McLean has been one of the region’s top programs, finishing runner-up to Washington-Lee at three straight regional meets. Last year, the Highlanders outperformed the Generals at the Conference 6 meet, winning the title, and at the state meet, where McLean finished second to Frank Cox.

“Going forward, I feel pretty good,” McLean head coach Courtney Lesson said. “I feel like we’re getting our kinks and our falls out now. We’re just working to improve for the next meet and moving one meet at a time to hopefully make it on to the state tournament.”

Carolyn Brown-Kaiser was the lone McLean gymnast to compete in the all-around. The freshman finished runner-up with a score of 34.6.

“She is a top contributor and has been immensely helpful to our team,” Lizzy Brown-Kaiser, Carolyn’s sister, wrote in an email. “She's a powerhouse, so she really bumps up our vault and floor team scores.”

Fairfax's Rachel Barborek won the all-around with a score of 38.325.

“Being a senior this year definitely has me feeling more excited and confident this year,” Lizzy Brown-Kaiser wrote. “I know that my fellow senior Jackie Green and I really want to go out with a bang. I have always felt good about the team every year I have been on it, but I think this year we will be stronger than ever.”

McLean is scheduled to compete in a meet at Washington-Lee High School in Arlington at 6:30 p.m. on Jan. 22. The Conference 6 meet is Feb. 2 at McLean High School.