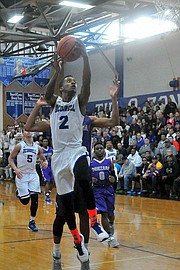 With the score tied in the closing seconds of regulation, Adams attacked the rim and dropped in the game-winner, giving the Knights to a 59-57 victory over Gonzaga on Monday at Bishop O’Connell High School.

Adams, a 6-foot-3 junior, finished with a career-high 30 points, including four 3-pointers. His bucket in the closing seconds gave the Knights their only lead of the contest.

“My teammates, they believed in me,” Adams said. “They gave me the ball and I knew I had to make a big play, so I made it.”

Gonzaga led by as many as 16 points in the second half, gaining a 43-27 advantage when sophomore guard Chris Lykes scored midway through the third quarter. Adams responded with back-to-back buckets, however, and O’Connell started chipping away at the lead.

The Knights trailed by seven entering the fourth quarter. An Adams bucket cut the Gonzaga lead to 55-53 and a pair of free throws by senior guard Jamaal King tied the score at 55 with 2:15 remaining. With the score tied at 57, O’Connell held for the final shot and Adams, a Washington, D.C. resident, came through.

“It’s always great to see a kid mature,” O’Connell head coach Joe Wootten said. “He went from a young sophomore that would get down on himself to now he’s a mature junior. I’m really proud of him. He’s really grown and I think the sky’s the limit for him.

“I think he’s got the ability to play the highest level of college basketball.”

Gonzaga scored the first nine points of the game and led 26-13 at the end of the first quarter. Lykes, listed at 5 feet 7, scored 12 points for the Eagles in the opening period.

Adams finally scored for O’Connell with 3:51 remaining in the third quarter, cutting the Gonzaga lead to 43-29 while snapping a 5-minute, 56-second scoring drought for the Knights.

A pair of buckets by O’Connell junior Randall Gaskins cut the Gonzaga lead to 49-42 at the end of the third quarter.

Gaskins finished with 10 points for the Knights. King also scored 10 points, including a pull-up jumper that tied the score at 57 with 53 seconds left in the fourth quarter.

“I thought he was just tremendous,” Wootten said of King. “... He’s got the heart of a champion.”