People At Work: On Route, Collecting Trash in Alexandria
Votes

People At Work: On Route, Collecting Trash in Alexandria 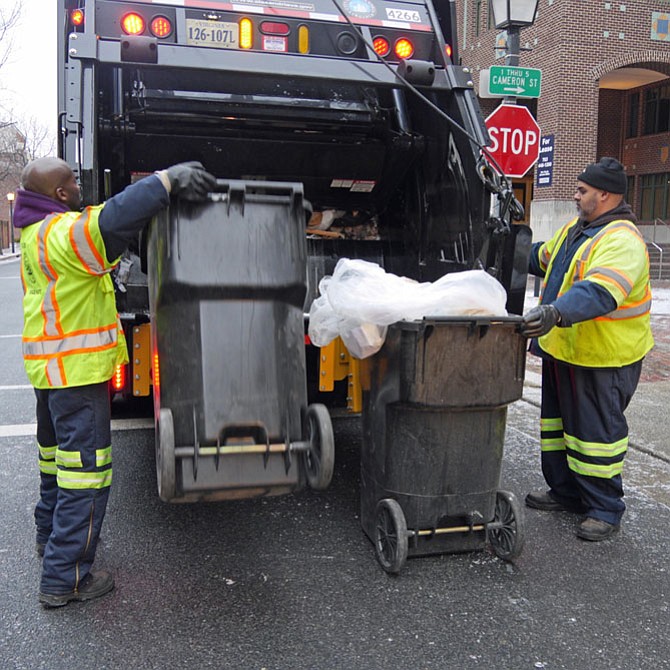 It was 7 a.m. and 25 degrees in the truck yard. The hose on the trash compactor at T.C. Williams high school had frozen up and city resources for trash collection were reconfigured on the spot. 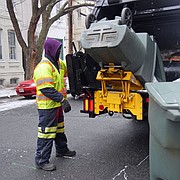 Anthony Jones waits for the metal platform to empty the trash can upside down and return it to the street.

"Usually we start out downtown because there is less traffic early and it is more convenient," said Vince Green who is a refuse truck operator for the City of Alexandria facilities route. "We collect from city facilities like schools, city hall, the Torpedo Factory, firehouses and we pick up trash several times a week or every day, unlike the residential routes." The residential side has 20,000 customers who have pick up for trash, recycling material and some households for yard waste, which is new this year.

"Not too cold today — at least not like last week." Nevertheless, the first thing the refuse drivers do on the winter mornings is to tap their truck to evacuate the furry creatures who may have lodged in the warm recesses of the truck overnight. Green slowly backs his 18-foot trash truck #4266 around a corner, warning bell beeping, and parks by a church next to T.C. Williams. "We pick up at a few churches," he said. Next stop is in Old Town where the truck bumps along toward the Torpedo Factory. Green's partner of five years, Anthony Jones, sports a similar fluorescent yellow jacket and matching stocking hat. Jones rides in the passenger seat or sometimes hangs off the back of the truck for short distances. Green reaches his first stop in Old Town and bolts down the two steps on the driver’s side. Together they wheel the large cans of refuse from the Torpedo Factory where a metal platform grabs the cans and dumps them upside down into the hold of the truck. A large silver blade lowers and scoops up the trash into the hopper and back into the body. "We get basic office trash here but sometimes you can tell the artists have been working on projects. We get wood, fabric or old paintings." Today several large wooden frames join the pile. 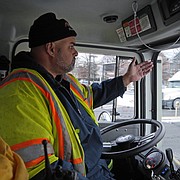 “This way, “ Vince Green gestures as he points toward Old Town where his facilities route will include the Torpedo Factory, City Hall and about 20 additional city buildings.

An average schedule for Green's facilities route is 6:30 am-2:30 pm. But this is a work task job which means he goes home when the job is done. "Sometimes it can be a bit longer. This truck also handles misses and late calls if someone forgets to put out their garbage. In the morning I add these to my route plan for the day." Usually there are 20-23 stops on a daily basis including 3-yard and 6-yard dumpsters. The trucks go out in all weather "except last Tuesday with the big ice storm. We went out but we had to come back in. The storm came on so quickly and no one expected it. It was unsafe." Generally the 15-ton truck can hold all of the trash on any particular day. "But in May and September when schools are cleaning out or setting up for the new school year, we may need to have two truckloads." 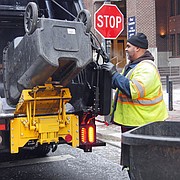 Vince Green waits for the mechanical platform to empty the trash can upside down and return it to the street where he can wheel it back to be filled again. 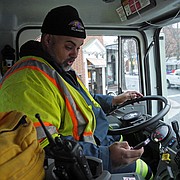 Vince Green searches for the picture on his phone of the strangest trash he ever collected, a deer’s head with the antlers cut off which a local firefighter “with a great sense of humor” put in his trash can to surprise him.

Green has been working as a refuse truck operator for the City of Alexandria for almost seven years. Previously he worked in refuse collection for the City of Rockville for eight years. In addition to his current job he has a small business as a computer technician and works security. Because the refuse collectors are city employees they often get to know their customers who sometimes wave and call them by name. Green can't forget the most unusual trash he ever picked up. Once there was a live long, black snake. But Green chuckles remembering, "the firemen over by the Lee Center have a great sense of humor. One of them took a deer's head, cut off the antlers, put it in the trash can and covered it up. When I got ready to empty the can I found this deer's head staring back at me. I thought 'I'm getting ready to run.' The fireman was standing back around the corner watching and smiling at me. Here,” he said. "I have a picture on my phone."