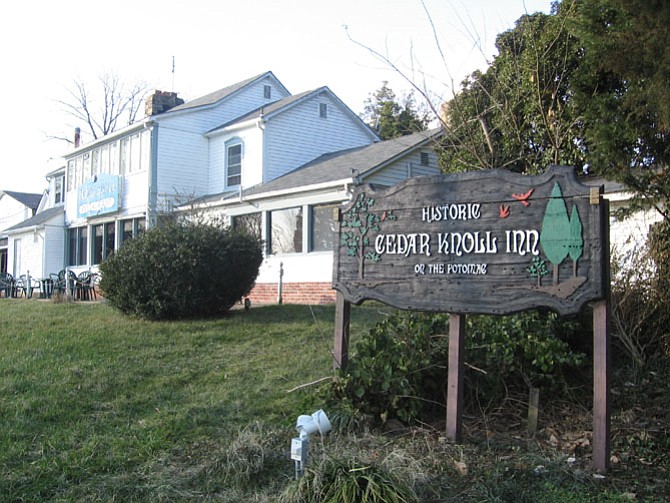 Renovations are planned for the Cedar Knoll Inn. Photo Contributed

The Cedar Knoll Inn restaurant, located on the banks of the Potomac river, and a few minutes drive on the Mount Vernon Parkway from George Washington’s estate, closed this past November.

However, according to Gant Redmon, attorney /advisor for the owners, it will reopen sometime this spring after a new restaurant lease is signed and renovations are completed.

In 1752, George Washington became the sole owner of Mount Vernon Plantation. He acquired five farms including River Farm which is where Cedar Knoll Inn is located. The original farm house which is Cedar Knoll today was constructed in the early 1800s as a tenant farm house for the 115.34 acre plantation called Markland on the Potomac. Later, Pauline Walsh became the first owner to use the building for commercial purposes. She extensively remodeled the building into an antique shop called Mount Vernon View Antique Shop.

According to Redmon the most recent lease-holders — since 1993 — and the Cedar Knoll property owners terminated their relationship “by mutual agreement.” Redmon outlined some of the complexities that have to be dealt with before the restaurant reopens. First, a new restaurant lease has to be signed and that hasn’t happened as of now although discussions are underway with several candidates. Secondly, the specifics of the renovation have to be negotiated with the county, based on the zoning constraints that the property must conform to. Namely, the zoning agreement that the Cedar Knoll property now operates under is one of a “nonconforming use,” in a residential zoned area. According to Redmon the owners are not allowed to enlarge the building, add rooms or add “wings.”

Also, the second floor can only be used for office space, and not to serve food to guests. Redmon said the community may not be aware that historically at one time it was used as a “Tea Room” which, at the time, presented a dilemma for the county planners. The closest the county could come to zoning in conformance with the modern day master plan at the time was to designate it as a restaurant. But in order to gain approval, an occupancy permit and zoning had to be approved with the specific building restrictions that are still in force.

“Our current plan is that once a new restaurant operator is selected and renovation plans are agreed to, we will work closely with county officials to turn this into a beautiful facility that will serve quality food for individual diners as well as continue to offer it as a facility to host weddings, community, and business meetings, and everyone will be able to once again enjoy the unique Potomac river view,” Redmon said. “We are dedicated to reopening Cedar Knoll Inn as soon as possible.”

Holly Dougherty, executive director of the Mount Vernon – Lee Chamber of Commerce was delighted by the news of plans to reopen the Cedar Knoll Inn restaurant this spring. “That is very good news. Cedar Knoll Inn is such a wonderful setting for a restaurant and meeting place for the community,” she said. “Everyone will benefit by its continuing as a restaurant and place for community and business groups to meet, and a place to celebrate important events.”