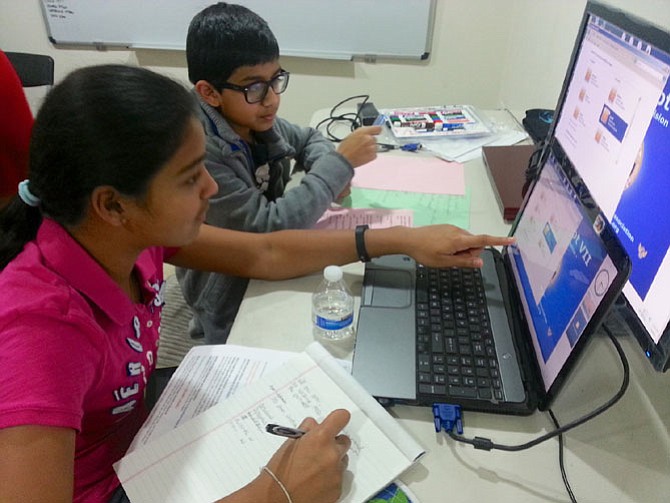 Nysmith CyberPatriot Youth Cyber Defense Competition Team 1 Members Monica Saraf and Aryaan Hussain, both seventh graders and both from Herndon, work a problem from the contest together. The team took first place among all participating Virginia schools and second place against all schools nationwide in the recent semi-final round. Photo courtesy of Bonnie McCrystal

The security of the internet is a hot topic in the news these days – think hacks into retail credit card data, student identification and information, personal correspondence a la Sony, and even more worrisome, infiltrations like the recent “CyberCaliphate” hacking into the Twitter and YouTube accounts of the U.S. Central Command. With the way technology is becoming irrevocably intertwined with all aspects of daily living, there’s no doubt that it’s a topic that will only continue to demand our attention. More importantly, it will require a large population of educated, creative and computer-savvy problem-solvers to deal with the problems and defend our cyber security. So it makes sense to start the education and recruitment process early to address not only the needs of today, but also the growing needs of tomorrow. That is exactly what the Air Force Association (AFA) aims to do through their CyberPatriot National Youth Cyber Defense Competition (CyberPatriot). CyberPatriot is the organization’s flagship STEM (Science, Technology, Engineering and Mathematics) program, dedicated to encouraging interest in and the study of STEM subjects and strengthening these skills in our youth: 2014 marked their seventh competition season and drew a record number of entrants. More than 2,150 teams registered from all 50 states, Canada and DoD Dependent Schools in Europe and the Pacific - including two teams of enthusiastic middle-schools students from The Nysmith School for the Gifted in Herndon, who graciously agreed to an interview for The Connection with the supportive consent of school Headmaster Ken Nysmith.

Seventh grader Aryaan Hussain of Herndon and a member of Team 1, came across information on the competition at a booth at a STEM symposium at about the same time as Nysmith parent Bonnie McCrystal did. “I am always on the lookout, scouting for opportunities for our kids to grow and expand and see that what they learn has a place in the real world,” said McCrystal, who was so excited about the challenge that she became the coach of Team 1. School-wide emails and other communications were released, and before long enough students had committed to the lengthy competition process to form the two teams, the one coached by McCrystal and captained by eighth grader William Tan of Great Falls, and Team 2, coached by Praveen Bahethi and captained by another eighth grader, Sameer Bahethi of Lansdowne. And a lengthy and involved process it is.

ONCE THE TEAMS are formed and officially registered, the instructions and practice rounds began, starting in August of 2014. The teams are treated like newly-hired IT professionals, tasked with finding vulnerabilities in a number of operating systems and simulated environments – without causing further damages to those “systems” or problems for their “users.” “You are trying to score 100,” said Team 1 Captain Tan. “It doesn’t help if you do something that gets you a penalty, instead of a point!”

Working online with a variety of operating systems that would seriously daunt most average computers users, the young competitors are given three “images” – “containing all of the files of each system,” explained Bhavjeet Sanghera of Clifton and Team 1, that must be extracted and carefully reviewed during the six hours allotted for each practice and scored round. Yes, that is six hours per practice round and six hours for each of the scored rounds and the semi-final sessions that were held Jan. 16-18. And those practice rounds weren’t exactly a piece of cake. “We started on high school level problems,” said Devon “Muscles” Host, a seventh grader from Oak Hill. (Apparently all of the members of his Team 2 earned nicknames fairly early on in the adventure.)

The two teams brought different approaches to the challenge, but both started with the same goal; “Do the best we can for ourselves, our team and for our school,” declared Team 2 member Restonian Khinezin Win who, by her own admission “didn’t know that much about computers before I got onboard.” Nor did either team leave anything to chance. “We had a game plan, right from the start,” Captain Tan stated. Tan’s Team 1 went straight for the “READ ME” files and dissected them fully before taking action. Bahethi’s Team 2 decided to start each contest by updating each system to ensure the most stable versions before beginning their search for the security flaws.

Both also employed a “divide and conquer” strategy, assigning pairs of team members to two of the three “images” and one person to work solo for awhile on the third “image.” In order to keep the creative juices flowing and to provide the proverbial fresh set of eyes to the problems before them, there would be occasional member rotations. “It seems like you always got stuck at around 80 percent,” said Team 2 member Host. “It was good to change it up a bit. Moving people around helped us get going again and gave us some new ideas,” Host added. What else did the young competitors do to keep themselves going during each marathon session? “There was always food!” Hussain, Tan, Host and several others declared in unison. “And our parents were really supportive, making sure we had the space to do the work without too many interruptions and that there was food when we needed to take a break,” acknowledged Hussain. Some distractions, however, were apparently quite acceptable. Team 2 Captain Bahethi said that his younger brother’s presence during their efforts was welcomed by the group. “He kind of became our mascot,” said Bahethi.

Both teams also agreed that a bit of scorekeeping as they went helped to keep their spirits up. When a team scores points for identifying and correcting a security issue, there would be a “Super Mario video game type sound,” said Team 1 Captain Tan. “That would give us a huge boost! We lived for that sound,” he said. “When we finished something that we just knew was right we all just waited for that sound.” Apparently, nerf ball fights and ice cream interludes also helped relieve any tensions and keep everyone focused. More than that, the team members were unwilling to disclose. After all, “What happens in my basement during the competition stays in my basement,” laughed Monica Saraf, a seventh grade member of Team 1, whose home in Herndon was Base Camp for her team.

So, what was the outcome of all of this hard work and hours of dedication? It was pretty spectacular, and something that had Headmaster Nysmith and Coach McCrystal beaming with pride. The results from the semi-finals are in and Team 1 scored First Place among all participating Virginia schools and Second Place Overall in the Middle School Nationwide Division. Team 2 took home third place honors for Virginia Schools. As a result of their semi-final scores, Team 1 will now move on to the CyberPatriot National Youth Cyber Defense Competition Finals to be held March 11 – 15 at the Gaylord National Conference Center. National recognition and scholarship monies await the winners, thanks to the generosity of sponsors like Northrop Grumman Foundation, USA Today Education, Cisco, Leidos and many others.

AND AFTER ALL is said and done, what do the young members of Nysmith School’s CyberPatriots Team 1 and Team 2 want the world to know about the competition and what it has meant to them?

“It’s literally about our future. Kids as young as 6 have cell phones in their hands. It’s all about computers,” said Oak Hill resident Rhea Shah, a seventh grade member of Team 2. Team 1’s Monica Saraf says she learned “Just try. You will learn and you will learn what your future can be.” Practical sixth grader Team 1 member (and possibly the youngest participant in the contest at age 11) Ryan McCrystal added, “Doing something like this early on in life leads to better and higher paying jobs, a real career.” “Muscles” Host agreed. “This experience has really set me up for so many vast opportunities.” “And don’t forget about the teamwork,” reminded Aryaan Hussain, causing a flurry of head nods and a few high fives. “Yeah, and the fun,” noted Team 1 Captain Tan. “It was fun. I mean, it’s technology!”

Coach McCrystal had the last words before the interview session ended with her stated intention of seeing the Nysmith School take 1st, 2nd, and 3rd Places in the next CyberPatriot Competition.

For more information about The Nysmith School, visit their website at www.nysmith.com. Complete details and resource materials about the Air Force Association’s CyberPatriot Program, STEM Outreach and competitions are available at www.uscyberpatriot.org.