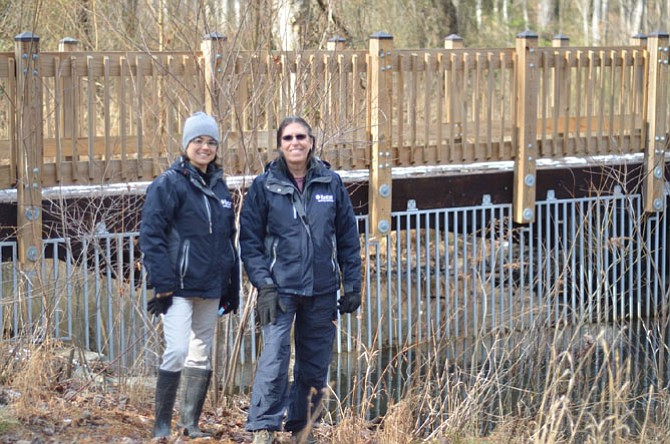 The Glade Stream Valley in Reston has been home to beavers for over 25 years. Reston Association’s environmental resource manager, Claudia Thompson-Deahl said beavers originally entered the stream system from the Twin Branches end, probably traveling up from the Potomac River via Difficult Run. Beavers, an industrious mammal once native to Virginia were almost eradicated soon after European colonization. However, the Virginia Game Commission reintroduced beavers when they began a reintroduction program for beavers between 1932 and 1938. 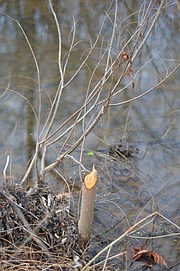 A chewed off trunk of a tree is evidence a beaver was in this area of Reston. The Glade Stream Valley in Reston has been home to beavers for over 25 years.

Beavers have no awareness of human property and conflicts may occur. Reston Association and Reston residents are interested in helping make sure landowners and policymakers consider ecological benefits as well as property damage when developing beaver control policies. A wetland’s fencing meeting was held the evening of Jan. 21 to discuss the proposed fence installation that will surround the beaver wetland behind Leatherwood Drive and Hunting Horn Lane. The meeting was open to the public, and included a review of the history and current state of beaver habitation in Reston. “We really wanted to hear from the public who live in the area,” said Larry Butler, Senior Director of Parks, Recreation and Community Resources.

TO PROTECT the small wetland space where some beavers dwell in Reston, a fence and gate was set up by the Reston Association’s (RA) former manager of construction and repair, Dan Warfield, designed to keep the beavers in the management area. With Warfield’s gate, water can go through, but beavers cannot. The gate was featured on the television show "Animal Planet" for its innovation as part of the National Wildlife Federation's Backyard Habitat series. However, time has weathered down and damaged the current fence. “The existing fence is in bad shape and will need a lot of replacement,” said Claudia Thompson-Deahl.

A map of the proposed changes for the beaver fence near at Glade Stream Valley in Reston. The site is located between Glade Drive and Lawyers Road.

Reston is a certified Wildlife Habitat Community, and many residents take pride in the fact that despite the municipality’s size and population, there are many green, nature friendly parts of Reston. “Beavers provided a really good habitat, they help manage the stream and allow diverse species to come into our area,” said Lucinda Shannon, who occupies the three-year Hunters Woods/Dogwood seat on the Reston Association Board of Directors. For many residents, the area of Glade Stream Valley remains a special place. “When we first moved here in 1984, I let my children walk down on the trails to Twin Branches, they called it a paradise,” said Reston resident Julie Barcus.

Beavers are one of Reston’s most conspicuous residents. While they create wetland habitat for many other species of wildlife to enjoy, at times their creative engineering may cause conflicts with other land users. The flooding of pathways and damage to trees and docks are some issues which may result of beaver habitation. “This area is about nature, and nature is always changing,” said Thompson-Deahl.

To build a dam, beavers cut small trees or use branches from larger trees. The cuttings are then dragged or floated to the dam site, where they are anchored to the bottom and to each other with stones and mud. The dam is added to until the size of the pond meets the needs of the beaver. The dams are not waterproof and require constant attention. High storm waters will frequently carry away large portions of a dam, but the beavers are quick to repair the damage. In addition to the pond, a series of canals may be constructed to allow safe travel to distant sources of food or to connect ponds together. Willow trees have been planted along the stream bank for beaver consumption.

STATE REGULATIONS control the final disposition of trapped beavers and opportunities for relocation may be limited. Reston Association will provide information, advice, consultation and referrals if needed. However, RA cannot provide fencing for each individual homeowner’s property. For help in resolving conflicts with beavers or other wildlife, contact RA at 703-435-6547. “My impression is that a lot of people like having beavers in the area, and understand the complications of managing them,” said Larry Butler.