Rail Is Better than Bus
Votes

Rail Is Better than Bus 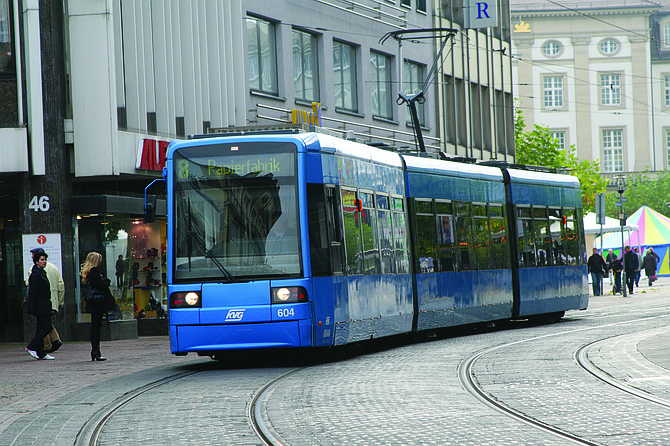 A trolley car in Kassel, Germany. Photo by Bernd Kittendorf

I sit on the AT2X bus taking me home from work. It pulls out of Mark Center and onto the Seminary Road bridge over 395. I can see below four lanes of cars, packed and barely moving. It’s like this every day. North-bound lanes are busy too.

Alexandria is at the crossroads of being a small car-dependent city to being a well-connected, modern city with transit options including bus, train, metro and light rail. But we’re not there yet. At the moment the roadblock to light rail is often cited as financial. The alternative to rail is always bus. Alexandria has a great bus system, which is used by lots of people. White collar workers, blue collar workers, natives, locals, blacks, whites, short, tall, Episcopalians ...

The reasons that bus will never be as good as light rail are these:

Being unhindered by rails, the bus system feels the need to give us multiple route options. On the number two, every third bus stops at all stops. The others don’t stop at all. One goes left around the lot. The other avoids the lot. People need predictability in their commute. Nothing is more predictable than a vehicle on steel rails.

I spent my teen years in Germany where I rode light rail, or the “trolley” to school. The town, Kassel, is about the same size as Alexandria. The trolley came every seven minutes. There was the four, the two, the eight, the one. Let us take inspiration from Europe and keep it simple.

What about tourists? In 2014 Alexandria was visited by over one million people, according to Alexandria Convention and Visitor’s Association. We get students coming to our schools, researchers coming to work in Washington, tourists, conference attendees and more. My uncle was coming to visit and asked about taking the bus to the Mark Center Hilton. Would a visitor take the time to research the AT2 versus the 28A? You know your transit system has arrived when tourists will use it.

Noise pollution: Once while visiting Switzerland, I was riding the trolley through a typical pedestrian-only town center. Two elderly ladies were happily chatting away as we passed by. I remember it being quiet with only the sound of the rails and people. I thought about how freedom of movement for the old and young seemed to make people happy. Overhead wires were not really noticable. What was noticable was how quiet a car-free street is.

Air pollution: Buses can run on gasoline, diesel fuel, compressed natural gas and even hydrogen fuel cells, with varying costs and emmissions for each technology. Rail runs on centrally produced electricity and produces no local pollution.

This country is young. Scotland built its network of railroads in the mid 1800s, using competition among companies and government support of the expansion to quickly build tracks serving the south-western counties. However, the U.S. has grown so quickly over the last 250 years that our main infrastructure is asphalt. That was just a holding plan. The real infrastructure, railroads, is yet to come. When we needed sidewalks, did everyone complain and say we can’t afford to put in sidewalks? No. Sidewalks were built and have been used ever since.

I was devastated when I read that Arlington abandoned its light rail plans for Columbia Pike. What a blow to the business community, the old ladies, the youngsters and everyone who was going to benefit from that brilliant plan. Hopefully common sense will prevail soon. I believe that if we find the funds and build light rail, we will come to love it and wonder why it took us so long.

The writer, Ellen Hamilton, is a graphic designer living in Alexandria, whose studio is called Yellow Dot Designs. She serves on the Alexandria Archaeology Commission.