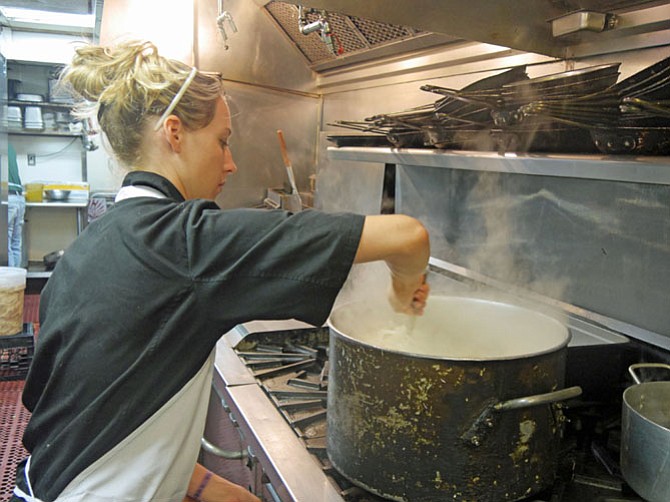 Steam wafts over the stove as Allie Barfield, chef at Bilbo Baggins on Queen Street, stirs the simmering onion soup that she is making for lunch.

Steam wafts over the stove as Allie Barfield, chef at Bilbo Baggins on Queen Street, stirs the simmering onion soup that she is making for lunch.

Ancho chili pepper, garlic and onion powder are poured into the large aluminum pot already simmering with ketchup, vinegar and leftover pork drippings. “We don’t waste anything here,” Allie Barfield, chef at Bilbo Baggins on Queen Street said. “This BBQ sauce is very complex. Now I'm adding the sweet chili sauce. We put in cinnamon sticks, Worcestershire sauce, tamarind paste, sweet red curry paste and fresh coffee. People taste it and say 'what is in that'." She explains the recipe is half from her husband Garrett’s family, his uncle Barfield's pig pickin' sauce sold in North Carolina grocery stores and half from her family's restaurant recipe. 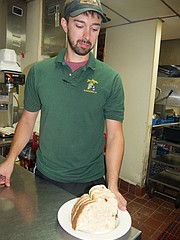 Allie Barfield’s husband, Garrett, who handles the upfront duties and manages the bar, is loading up a plate with raisin bread made with seven different flours from Pennsylvania. “Some people come here just for the bread,” Allie Barfield said.

"My parents have had this restaurant for many years. My father left home in Long Island at 16 and went to Switzerland where he was classically trained. He worked as a chef in star restaurants in eight countries over 10 years. He taught me what I know. Garrett and I lived in North Carolina and one day he said we should start a restaurant. I said ‘Are you crazy?’ My family has had a successful restaurant for 30 years and we would probably go broke in less than five years if we started our own,” she said.

So they moved back to Alexandria where they are gradually taking over Bilbo Baggins. "I started in the back of the house (the kitchen) in 2012." Now her husband is the bar manager and in charge of the front of the house.

A final step in the preparation of the special BBQ sauce is the grating of lemon and orange peel. The sauce will simmer for 2-3 hours until it has thickened.

"I have been working here since I was a teenager, out in front hosting. I would always be in the kitchen peeling carrots on days off from school or rolling silverware in napkins. When my class took a field trip they would stop here and my dad would make them lunch." She picks up a large bottle. "See I'm putting in the molasses to give the barbecue sauce some thickness and the dark color.” It will cook for 2-3 hours.

Nine loaves of raisin bread are lined up on trays waiting to be sliced and delivered to lunch diners. "This is our famous raisin bread. I use seven different flours that I get from Pennsylvania. People come here just to get it." On the rack below are homemade croutons for the white chocolate bread pudding. "We make everything from scratch here down to the mayo,” she said. A pot of onion soup sits on a back burner, steam filling the kitchen as she stirs the onions into the broth. Barfield has sliced the onions and sautéed them in canola oil until they are softened, added two casseroles of chicken stock as well as beef consommé. She will finish it off with fresh thyme. Today she had arrived at 8 a.m. to bake the bread and begin making the onion soup and lobster and shrimp bisque. Then on to the set up and prep work. The restaurant opens at 11:30 a.m. except Sunday when it opens at 10:30 for brunch.

Barfield has seen tastes change in the restaurant over time. "People don't eat as much dessert because they are on a diet. Also they look for small plates."

She explains that a number of their dishes combine different ingredients than one would expect. "Years ago we made fried chicken wings but then people didn't want to eat fried food." But she says they reinvented the dragon wings marinated with spicy lime leaf sauce and finished with cilantro and crushed peanuts for texture. "These are popular in the bar." She says her father added pizza a few years ago and thought they would sell a few. "But pizzas are very popular and we probably sell 500 a week. We get our pizza stones from Italy and they take a l-o-n-g time to get here, but they work really well. It only takes 2-3 minutes to cook this Shire pizza (shredded pulled pork, caramelized onions and that special BBQ sauce) in the 800-900 degree oven," Barfield said. “We used to cook our pizza there, pointing to a large brick fireplace in the center of the dining room. “But then the fire marshal came ….”

Garrett interjects that one of his favorite dishes is the fettuccini with seafood, especially since they started adding the fresh clams and mussels.

Barfield said that 10 years ago when people asked her dad what he did and he said he was a chef, they shrugged their shoulders and said OK. Now with the advent of all of the food networks exploding, people think it is a glamorous job. But she reflected that most of the time it is not; it is hard work. A crab-asparagus quiche joins a Caesar salad on the top shelf ready to be delivered to the first lunch customers. Barfield double checks the pot, grates in fresh orange and lemon peel and stirs the barbecue sauce one more time.