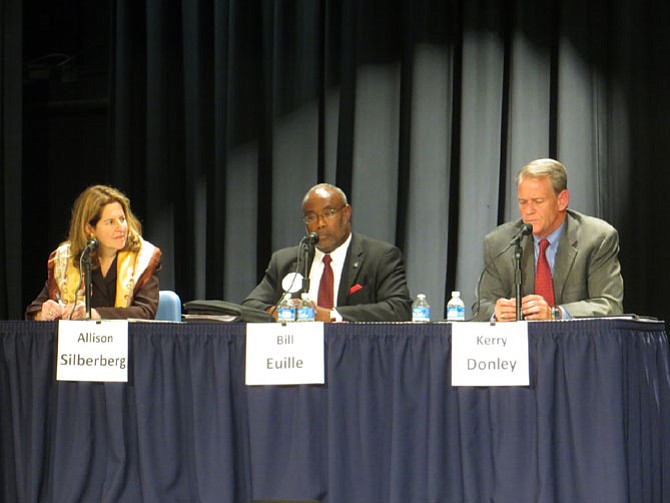 Attendees to the June 2 Democratic Primary Debate, one week before the primary, hoping to see sparks fly between the mayoral candidates may have left disappointed. While previous debates had commonly featured spats between the three candidates, the final debate saw none of the sharp accusations.

Mayor William Euille and Vice Mayor Allison Silberberg noticeably shifted the focus of the campaign rhetoric. Silberberg, whose major campaign focus has been balancing development in Old Town with preserving the local history, referenced growing Alexandria’s commercial tax base as her highest priority.

At one point, Euille was asked not to reference the Potomac Yard Metro Development by moderator Julie Carey, which has been one of the major cornerstones of the mayor’s reelection campaign. Instead, Euille said housing affordability in Alexandria was his number one priority. Between 2000 and 2010, Alexandria lost 8,368 units of affordable housing. There is currently a 6,952 person waiting list for public housing and a 7,840 waiting list for housing vouchers. Euille stated that, if reelected, he would make sure there is adequate affordable housing stock available in Alexandria, and cited over 40 new units of affordable housing at the new Potomac Yard Fire Station.

Like Silberberg, former Mayor Kerry Donley said his top priority as mayor would be diversifying the commercial tax base to improve the city’s financial infrastructure. The closest the debate came to targeting other candidates was Donley’s reference to the failure to properly staff and equip Fire Station 210 as a sign of the city’s mismanagement.

The three candidates held varied stances on transportation and traffic priorities. For Euille, the city’s focus needed to be on multimodal transit and interconnectivity across Alexandria. While avoiding reference to the Potomac Yard development, Euillle also cited his role on the creation of the King Street Trolley.

Donley said the Carlyle area of Alexandria serves as an example of his transportation policy.

Silberberg said her biggest concern regarding transportation in Alexandria is cut-through traffic on streets like Duke and Russell Road. In particular, Silberberg said she’s heard complaints from local residents that cars with Maryland and D.C. license plates tend to speed through these neighborhoods. With regard to mass transit in Alexandria, Silberberg said she supported Bus Rapid Transit (BRT) development, but said the wise course of action would be to hold off on further investment in BRT until the City Council can receive a comprehensive report on the financial sustainability of the existing Route 1 BRT.

While all of the candidates agreed that Alexandria Public Schools face an overcrowding crisis, candidates differed on the strategies to increase school capacity and the role of the mayor in this. Donley stated that the City Council needs to invest more heavily in the school’s operating and capital budgets.

For Silberberg, however, any increase in funding to the School Board needed to be met with greater levels of accountability and transparency. To address capacity, Silberberg proposed looking into converting the Nannie J Lee Memorial Recreation Center back into a school.

Euille said his relationship with the School Board is already a collaborative one and, to address enrollment growth, the schools need to identify potential sites for new building additions.

Asked about mistakes they made in office, both Euille and Silberberg said they had no regrets about any of their votes or policy decisions. Donley admitted that his one regret was not a high-impact mistake, but he said he wished that, when the Confederate statue on Prince Street and Washington Boulevard was knocked over in a car accident, he’d taken the opportunity as mayor to look into moving it to a less central part of the city, saying that it wasn’t representative of contemporary Alexandria values and was also a traffic hazard at its current location

As the debate finished, the candidates shook hands and exchanged messages of support with one another. The mayoral debate was followed by a brief debate between candidates running for the 45th District delegate seat.

“I’m undecided,” said Alexandria resident Uve Hodgins. “I came here not knowing who to vote for, but I lke to see competition in candidates.”

Hodgins said that her biggest issue in the campaign is infrastructure development, but said that she knew that it can be a double edged sword. Hodgins said, with a week left before the election, she’s going to reread the local newspapers for articles on the election before making her decision.