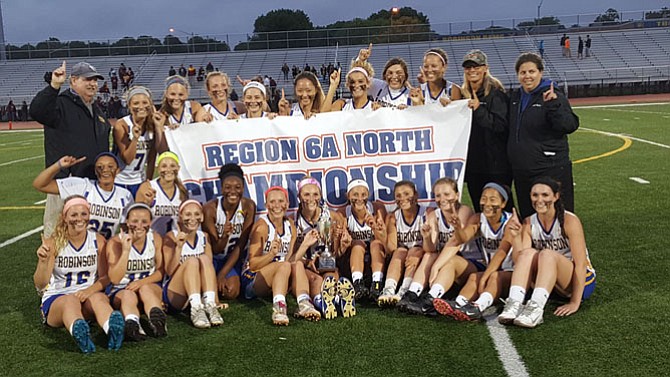 The Robinson girls’ lacrosse team won the 6A North region championship on June 2 with a 15-6 victory over Oakton at Robinson Secondary School. Photo by Jon Roetman. 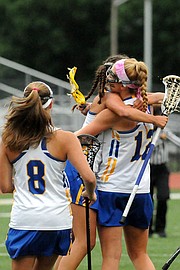 Robinson entered the contest averaging 20 goals per game, but managed just three in the opening 15 minutes.

Once Robinson got in a groove, however, the Rams would make up for lost time.

The Rams closed the first half on a 7-0 run, including a three-goal barrage in the final 20 seconds, and cruised to a region championship with a 15-6 victory over the Cougars at Robinson Secondary School.

It was the Rams’ first region title since 2009, according to results on laxpower.com.

Goals by sophomore attacker Katie Checkosky and senior midfielder Mackenzie Schuler gave Robinson a 5-2 advantage and led to an Oakton timeout with 5:50 left in the opening half. Senior attacker Izzy Obregon found the back of the net and Schuler scored again, extending the Rams’ advantage to four with 59 seconds on the clock.

ROBINSON then closed the first half with a three­goal flurry as Schuler, Checkosky and Obregon each scored in the final 20 seconds, giving the Rams a 10-2 halftime advantage.

“I think they were definitely hungry for the ball,” Robinson head coach Liz Case said, “and they were kind of like, ‘All right, we’re done playing [around].’”

“I don’t think we’ve ever wanted something more than this,” Schuler said. “We’ve been working toward it all season and we finally achieved our goal.”

Schuler tied a career high with five goals, including four in the first half, and added an assist.

Oakton’s lengthy first-half possessions “motivated us to keep getting that goal differential greater and greater because when they were holding the ball ... we definitely wanted to get the ball back,” Schuler said. “We don’t want the other team to have the ball. You can’t win a game if the other team has the ball.”

While the Robinson offense took a while to get going, the Rams defense was solid throughout, limiting Oakton to its lowest goal-scoring output against a public school opponent this season.

“This is actually, I believe, the first game that we’ve had a team play like that against us, where they just take so much time off the clock,” said Robinson junior defender and captain Emily Skrzypczak. “It was kind of weird at first, but I think we definitely worked well and used it to our advantage because they would take their time and that would help us get set up and be ready for when they do want to go. Then we’re all ready to crash and stop it and get the ball back.”

Oakton goalie Danielle Valenti had 10 saves against Oakton on June 2 in the 6A North region championship game.

“She always plays so well when we play great teams,” Schuler said, “and she stepped up today ...”

What is Valenti’s method to stopping free position shots?

“A lot of times coaches will scream, ‘Shoot low!’ or something, or I’ll hear other players say certain things,” Valenti said, “but, honestly, it’s just reacting real fast. We take a lot of free positions in practice, so that helps me out too.”

THE VICTORY improved Robinson’s record to 19-1 and earned the Rams a first-round bye in the 6A state tournament. Robinson has won 13 in a row since losing to Georgetown Visitation, 18-11, on March 31.

“We’ve all been working so hard the entire year,” Skrzypczak said. “Just to see it pay off is just so great.”