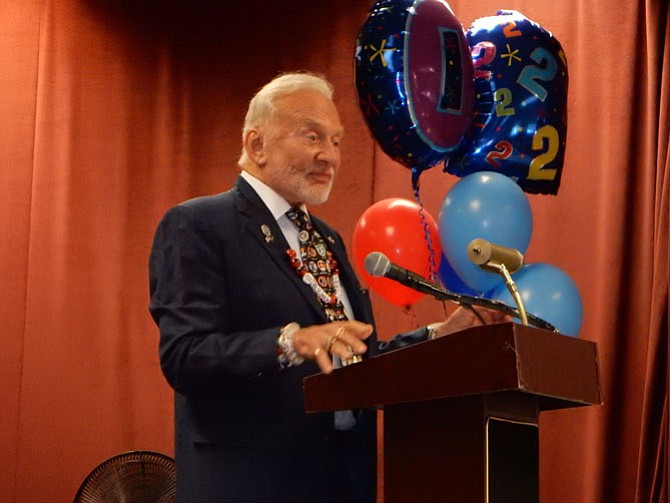 Aldrin Elementary School kindergartners wait for their assembly to start.

Hundreds of students, ranging from kindergarten to sixth grade, flooded into the auditorium of Aldrin Elementary for a special assembly this past Monday, June 8. They were about to witness none other than Buzz Aldrin himself. Born in 1930, Aldrin was a lunar module pilot on Apollo 11, the first manned lunar landing in history. Being the second person to ever walk on the moon in 1969, students, teachers and guests alike were thrilled to have him speak in celebration of the school’s anniversary.

The event began with the Reston Community Orchestra playing the Aldrin School Song, which is set to the tune of “Ode to Joy.” Even the song commemorated the work of this famous astronaut. The children proudly and loudly sang: “Aldrin, Aldrin, school for learning, science space technology. We have dreams to all succeed at Aldrin Elementary!” The musical portion continued, as instructors then led students in singing “I’ll Remember,” a song that was published the year that the school opened.

“It’s nice to be in a school where you really feel well cared for. I want to commend the staff and faculty at this school,” said assistant superintendent Douglas Tyson. Volunteers and staff were then appreciated for their hard work in making this event possible, as were the teachers who had been with the school since its birth 20 years ago.

The featured speaker, Dr. Buzz Aldrin, then took the stage. He began by asking the children: “Did you notice something different when I did the pledge of allegiance?” The kids began to make the sign of a salute, screaming at the astronaut if they knew the answer. “You know why I did that salute?” Aldrin asked, “It’s because I’m a veteran!” He then began to tell the students of the importance of service, and how the oath he took at age 17 has motivated him to be the best that he could be. “No dream is too high for you!” he added. “I hope you remember your teachers. They have given a little bit of their lives for you. Without education, I wouldn’t have had a chance. I want you all to make a legacy at Aldrin Elementary.”

Aldrin then proceeded to make the children giggle at his quirky jokes. “I wear a lot of funny things” he said, as he looked at his many beaded bracelets and necklaces. “I’m trying to be cool, because I think I’m cool! I think of new, different, innovative things.” He spoke of his aspirations for the students to be the first on Mars, calling them the “Mars Generation.”

The school held a reception after the assembly for alumni and guests later in the evening. Throughout the week, parents and volunteers will be coordinating ‘90s activities for the students during lunch and recess. The week’s celebrations will end with an overhead group picture of the student body and rocket popsicles for all.