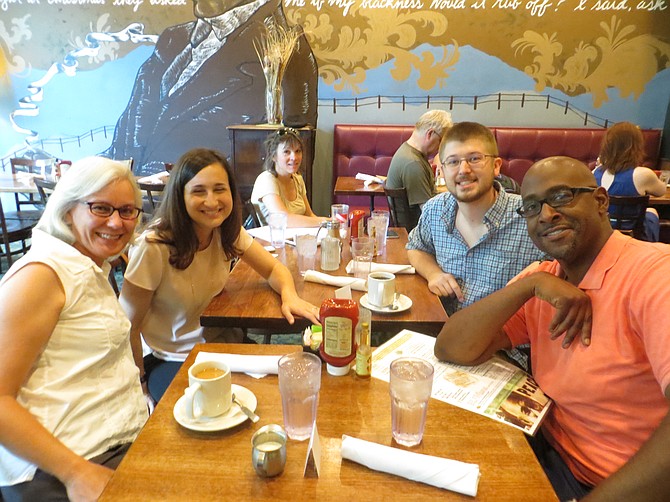 Arlington Democrats seemed to have emerged from the June 8 primary confident in their choice of leadership, but the push to keep two of Arlington’s County Board seats Democratic won’t be going unopposed with two independents running in November.

Arlington’s Democratic party is still haunted by the spectre of last year’s loss in the County Board race between incumbent John Vihstadt and Democratic candidate Alan Howze. However, the Democrats at the Arlington Democrat’s Monthly Breakfast on June 13 at Busboys and Poets expressed a unified belief that Vihstadt’s election was an anomaly.

Jim Webster, a local democrat, said Vihstadt’s election was primarily the result of the controversy over the streetcar, an issue put to rest when the County Board canceled all plans on the streetcar less than two weeks after the election.

“There is no big issue out there like the streetcar,” said Michael Klein, a local Democrat. “Vihstadt ran on a fiscal responsibility message, and I don’t think there’s anything out there the Republicans can skew to manipulate the voters.”

Clement said she was surprised to see Dorsey and Cristol win, saying she expected to be running against James Lander and Peter Fallon, two candidates Clement described as “establishment.”

“I view this as an upset,” said Clement. “I think Dorsey is going to be a challenge. He has portrayed himself as a progressive, which as an independent is the position I usually occupy. But I don’t know what Dorsey’s positions are on local issues. Katie [Cristol] also talks the talk, but neither are highly visible and I have not seen them attend County Board or School Board meetings.”

While their Democratic supporters showed no trepidation about the general election in November, the candidates themselves were less cocky.

“I’m definitely concerned about this fall, but that’s a good thing,” said Dorsey. “It means that Democrats can’t take any elections for granted.”

“Campaigns make for better candidates,” said Cristol. “We are taking November very seriously. There is a much bigger electorate.”

In the six-way race for the Democratic nomination to the County Board, Cristol walked away with 22.5 percent of the vote, 4,497 votes, with Dorsey trailing not far behind at 22.2 percent, 4,420 votes. While praising both candidate’s performance throughout the primary, Cristol was the clear focus of much of the room’s enthusiasm. In particular, Democrats at the breakfast couldn’t stop talking about Cristol’s age. At 30 years old, if elected, Cristol will be the youngest member of the Arlington County Board.

“This primary was all about embracing change and new ideas,” said Charley Conrad, “Katie [Cristol] is a fresh face. She’s a young person with a clear, concise message.”

“Katie’s win in the primary is monumental,” said Graham Weinschnenk, an 11th Grade student at Yorktown High School and the youngest person in attendance at the breakfast, “It is so important to have a fresh young face to represent millennials.”

At the breakfast, the candidates spoke in favor of an Affordable Housing Master Plan being presented across the county at that moment. However, Cristol and Dorsey were not uniformly in line with the County Board’s recent decisions. Clement and the Democratic candidates all expressed disapproval of the County Board’s decision to sell the Reevesland property.

“I don’t agree with the decision the County Board made,” said Cristol. “I feel concerned that selling the house to a nonprofit developer is merely considered an option. But county owned is also not the only way to move forward with this.”

Like Cristol, Clement said that she doesn’t have any problem with moving forward on Reevesland as a public-private partnership. However, Clement said she had serious issues with what she saw as a lack of transparency in this and other decisions by the Arlington County Board.

“To be honest, the real issue here is not the decision to sell,” said Clement. “The real issue is the process.”

While acknowledging that independents don’t have the momentum of issues like the streetcar, Clement said she believes topics like a lack of transparency on Reevesland and the continual erosion of the commercial tax base in Arlington are still enough to galvanize the Arlington community around an independent.

“It’s popular to say that Democrats in Arlington are on the retreat,” said Dorsey, “but that’s bull----.”