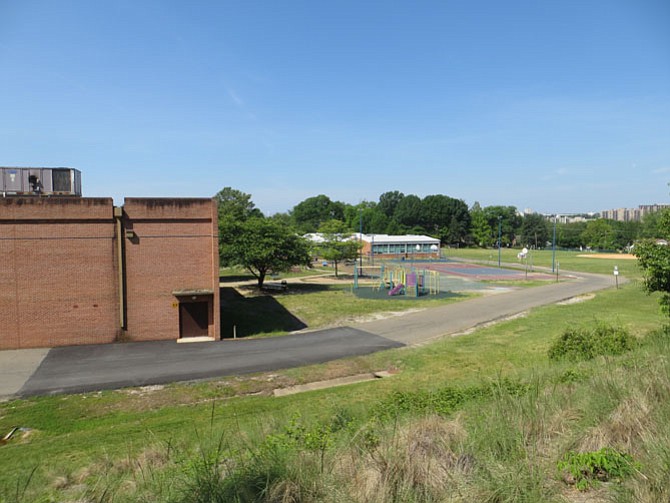 Chris Lewis, the School Board vice-chair, said that the School Board will address concerns from the community during the planning phase, particularly regarding the entrances and exits to the school, the size of the recreation center, and the height of the school buildings.

One of the largest concerns voiced from the neighborhoods is the roadway connecting the site to the nearby two-lane, residential North Latham Street.

“All points of ingress and egress must remain on Taney Avenue,” said Liz Parker, one of the school’s neighbors. “Access to Latham must be limited to emergencies.”

The access to Latham became the focal point of the public criticism of the project and eventually divided the School Board.

“[This] sends the wrong message to the community, and I won’t vote for the next phase of a plan if there’s a parking entrance or exit off of Latham,” said School Board member Kelly Booz. “I think a lot of my colleagues agree, so I don’t see why we can’t restrict that now to show good faith to the community.”

“We’re in the feasibility phase,” said School Board Chair Karen Graf. “If we ask our organization to articulate policy on the Latham egress issue, we’d be shackling the process before we get the best design. The architects need to have a canvas to work on.”

“If all I’m serving is after-school programs,I’m planning for 200 students,” said Spengler. “But if I’m also serving elderly or citywide programs, that’s a different space.”

Spengler said community feedback on the Patrick Henry Recreation Center’s scope has been split evenly between those who want to keep the nearby neighborhood quiet and peaceful, keeping the building as small as possible, and those who want to maximize use of the project’s budget to serve citywide needs. Spengler said the center ambitions are constrained by the $6.8 million budget. However, Spengler did note that the project is the only indoor recreation investment west of Quaker for the next 15 years of the Capital Improvement Plan.

While the recreation center will have an impact on the location of the parking lot and the egress from the school, Graf said it isn’t the School Board’s most immediate concern.

“The [Patrick Henry Recreation Center] is not going to have a grand impact on the design,” said Graf. “The largest constraint we’re discussing here is money.”