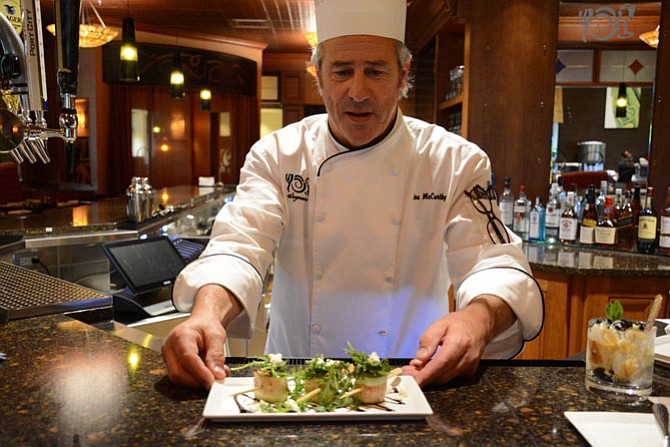 Joe McCarthy of Fairfax Station, executive chef of The Pub at Wegmans in Alexandria, serves up Cucumber Roulades: ribbons of cucumber rolled with roasted tomato and feta cheese. Photo by Tim Peterson.

At any other Wegmans grocery store in Virginia, Woodbridge resident Braden Cheney’s job wouldn’t exist. A 2000 graduate of W.T. Woodson High School, Cheney is manager of The Pub, a full-service restaurant and bar operating within the store.

It’s a first for any Wegmans outside of Pennsylvania, also the first with its kitchen in the back of the house.

“It’s different from a typical restaurant,” Cheney said. “The values — we listen to our employees and empower them to come up with new ideas, things I might miss.”

Cheney, who’s spent seven years with Wegmans including a role as manager of the Café in the Woodbridge location, gave the example of the large napkin dispensers found in the dining area. Employees came up with the idea, thinking it would be less wasteful for people to take what they need. The company went for it.

This new Wegmans in Alexandria opened its doors to customers Sunday, June 14 at 7 a.m.

According to Wegmans vice president of media relations Jo Natale, between 1,800 and 2,000 people were in line at the opening. Some of the first customers arrived at 3 a.m.

“The lines went in both directions from the front entrance and wrapped around both sides of the building,” Natale said.

Though she wouldn’t release specific figures, Natale it was a banner day: “In terms of sales, it was our biggest opening day ever, breaking the previous record of Northborough, Ma. in October 2011.”

Spanning 126,000 square feet, the grocery store is more than just that. With 550 employees, it stands as a career launchpad opportunity for community members joining the family-owned company.

Stacie Henley of Manassas started as a cashier in the Syracuse location. A manager happened to come through her line and recruited her to the cheese department because of her “bubbly personality.” Twenty years later, Henley is still with the company and managing Alexandria’s vast cheese shop.

“Cheese is so versatile,” she said. “For appetizers, entrees, there’s so much. Not everyone can be experts, so we try to help.”

There’s also executive chef Joe McCarthy, a Fairfax Station resident, who serves up Cucumber Roulades in The Pub — ribbons of cucumber rolled with roasted tomato and feta cheese — that can be replicated with ingredients found in the grocery store.

With the globe-crossing variety of prepared food in the Market Café as well as The Pub, Wegmans becomes more of a total gastronomic experience.

Aside from The Pub, this new Wegmans will feel familiar to anyone who’s shopped a different location. Each layout is meant to be custom, though navigation through the departments of bakery, deli, dairy, produce, health and wellness, household items, seasonal items, dry goods, wine and beer is fairly consistent with other stores.

One area that is expanded relative to those other locations is the prepared produce counter in the store’s midsection. “Every Wegmans starts with fresh produce,” said Natale. “It really is our crown jewel. And prepared vegetables are big.”

Customers at other locations can purchase pre-cut and washed produce, saving them from some of the more tedious and time-consuming aspects of cooking at home. Seeing this as a growing market, Alexandria devoted more real estate to this effort.