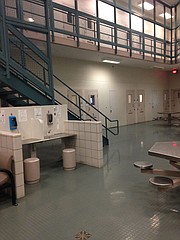 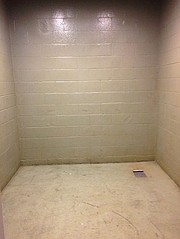 Holding cell in the basement of the Fairfax Adult Detention Center. 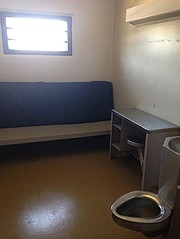 A young man with ruffled hair and tired eyes peers out through the rectangular window of his single cell door. His gaze drifts across the green-tiled dayroom of the acute mental health facility in the Fairfax Adult Detention Center.

The high ceiling of the dayroom reveals a second floor of single cells, the entire facility currently occupied by 45 incarcerated men. The young man’s eyes catch an observer’s and he nods in greeting. Besides this subtle gesture, the dayroom is quiet and still. The tiny cell windows above and below are brightly lit and faceless.

The women’s acute mental health facility is structurally similar yet compressed, holding 19 inmates. Both spaces contain central open spaces filled with metal tables and attached chairs. This is where supervisor Steve Weiss, the director of jail-based behavioral services within the ADC and his 14 team members of the Community Service Board sit down with each of the current 64 inmates to provide mental health services. But along with serving those in acute care, the 14 CSB team members provide mental health services to the jail’s general population, serving a total of 1073 inmates within the last six months, according to CSB Communications Director Belinda Buescher. During that time, the jail held a daily average of 1060 inmates.

“In a perfect world we would have a much larger staff and we would have a presence 24/7. If we did that with the existing staff that we have now we would be spread so thin and services would be so diluted that we couldn’t respond effectively when we are here,” Weiss said.

Sheriff Deputy J. Perkins who works in the facilities explains the Sheriff Department’s involvement with the facility’s mental health care. He points to “Ob-Logs” short for “Observation Logs.” “These are 15 minute checks because it’s high observation …” Perkins said. “It’s just another piece of the puzzle in reference to their mental health status.” Some of the check ups documented in the logs include whether or not an inmate takes their medication, what meals they’re eating and when they’re sleeping. “This gives you a real good picture in reference to how well they’re doing or if they’re deteriorating.”

Checking on these individuals frequently and extensively is a necessity when servicing mental health issues, because a state of mind can alter drastically even over the course of a few minutes. Weiss explains that these circumstances mean that the inmates who are prioritized for care changes daily. “We come up with a list every day of who we must see based on the severity of need, and then what we do from that point on depends upon the urgency of the situation.”

Weiss has worked in the Fairfax Adult Detention Center for 11 years, and before that, in other mental health facilities. Psychology textbooks, behavioral therapy manuals and other informational texts about the human mind line the shelves of his office. Despite Weiss’s knowledge and sensitivity toward mental health, he is adamant about referring to the services that his team provides as just that — services, not as treatment.

“I hate using the word treatment,” Weiss said. “… People often believe, it’s surprising — lawyers, police, family members especially, think ‘Boy, I hate to see this person go to jail but at least they’ll get treatment over there.’ I don’t really like to leave the impression that there is any equivalency between what we do here and what the person should receive or what they might receive in a hospital or in proper mental health treatment …. we want to do as much as we can for as many people as possible, but our objective is really not to provide primary treatment, it’s rather to engage, stabilize, and to transition.”

The CSB staff consists of social workers, psychologists, or psychiatrists who engage inmates by providing therapeutic group and individual sessions. Some of these sessions include goal-specific outcomes, such as substance abuse therapy. Other sessions may begin with confronting the most basic and important of mental health issues — figuring out what’s wrong, and the needs of the individual. Weiss says that a benefit these services within the jail is that “There’s no such thing as a no-show in jail for an appointment … there’s 100 percent show rate, that doesn’t mean that people are always cooperative. … There are instances where this is the first time when you’re [the CSB staff] able to get a clear picture of what’s going on. As crappy as life is in jail, it’s the most stable that somebody has been.”

“ONE OF THE FIRST stumbling blocks is the fact that often when people have an illness, whether it involves substance use or mental illness or both …. the illness itself prevents them from understanding that they’re ill,” he said.

This among other untreated symptoms of mental illness may result in the inability to pursue treatment after being released from jail, despite the Jail Diversion programs in place for continuing care. This increases the chances of individuals with mental illness repeating offenses and being placed right back within the limits of the Adult Detention Center’s CSB services, to which Weiss describes as a “catch all.”

In Weiss’s perfect world, people with mental illness wouldn’t end up in jail. Yet besides the fact that there aren’t enough beds available in state hospitals, there are also civil liberties that prevent a person with mental illness to be placed forcibly within a mental treatment facility. “For a lot of different reasons, people come to jail when the problem really isn’t criminal activity,” Weiss said.

He provides a hypothetical situation, “If I know that Sam can’t make good decisions for himself, and can’t care for himself, I can’t just say, ‘I’m putting Sam in a hospital.’ There are laws that protect people.” So when Sam starts to act out of control and the police are called, he can’t be taken to a hospital, but he can be taken to jail.

“It is not about this chunk or that chunk, all of them are equally important, the chain is only as strong as its weakest link,” Weiss said. These “chunks” or services include the utilization of Crisis Intervention Training on behalf of the Fairfax County Police, the availability of Jail Diversion options such as substance abuse treatment and outpatient programs, and increasing the support of post-incarceration options, such as housing, and placement within mental health treatment facilities.

“What we need to do is understand that this is a systemic issue … there needs to be seamless movement,” Weiss said. “I am in favor of more service in the jail — but that is a reflection of the failure of everything else.” He reiterates that the issue of mental health treatment within the community is, “A single problem with different pieces.” Weiss can only work to improve one.

WEISS SPENDS his days not only with the inmates, but with family members and friends who are also affected by this system. On the upside, these interactions make up his favorite part of the job. “It’s always being able to make something a little bit better for the person who is incarcerated or for the person that cares about them … always, there’s never any question about that.”

But with love comes heartbreak, as Weiss describes the difficulty in seeing individuals whose, “only crime really is being mentally ill.” He spoke to one such individual, a young man who was refusing therapy or medication “due to severe paranoia.”

Weiss was trying to convince him to apply to receive disability checks. After lots of time and persistence Weiss received, “the smallest sliver of a maybe” from the man “which I’m sure by today is going to be a no.” Weiss sighs, “But — it’s not always a no.”

Back in the lobby of the Adult Detention Center, a woman sits in the one of the plastic chairs and bounces a baby on her knee. Besides thumping the heel of her clog, she holds her body stiff as she looks above the baby’s bobbing head and through the doors leading into the Detention Center. Weiss said, “When people come here, whether they’re in the lobby worrying about the person inside or whether it’s the person inside the jail — they’re at the worst point in their life, and sometimes the smallest thing can make a very big difference …. sometimes it’s saying to a mother —‘I promise you your son is going to be OK, we’re watching him.’”