From swimming to fireworks, safety precautions for a festive Independence Day. 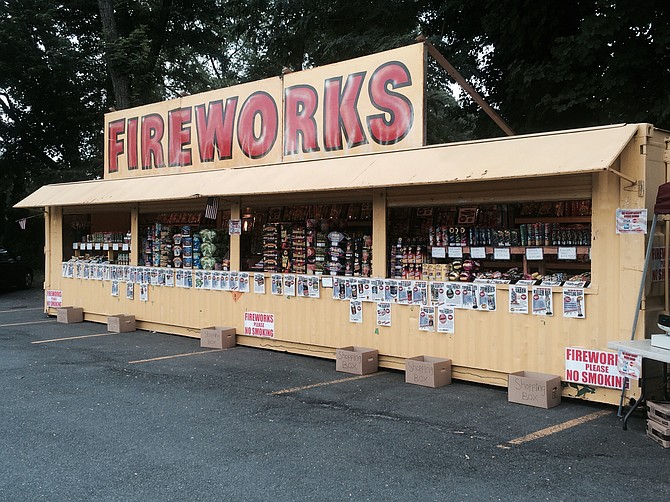 Fireworks are sold at a local stand at Lee Highway and N. Harrison Street in Arlington. Fireworks are synonymous with July 4th celebrations, but creating a fireworks display at home is illegal in some local jurisdictions. Photo courtesy of Arlington County Fire Department

It was a near accident at camp last summer that sparked action by one parent. Elementary school-aged campers splashed in the pool. Everyone was having fun. Then tragedy almost struck.

Jackie Wheeler says one second her 7-year-old son was frolicking on top of the water and the next he was bobbing just below the surface, gasping for air.

“One of the counselors took his eyes off of Noah for one second, and he started to struggle,” said Lee. “Ultimately, the lifeguard had to jump in and save him.”

Wheeler didn’t witness the incident, but its recounting was difficult for her to hear. That brush with danger became a defining moment for her family. She enrolled her son, who is now 8, and her daughter Ava, who is 4, in private swimming lessons at the YMCA in Bethesda, Md.

She’s not the only one thinking about safety. As Independence Day approaches and time spent at the pool, outside in sweltering temperatures and at fireworks shows increases, public health and safety officials are working to raise awareness about potential hazards.

Ensuring that children learn to swim and keeping a close watch on them at the pool or beach are two ways that officials encourage water safety.

Parents and caregivers should also be mindful of recreational water illnesses, which are caused by swallowing or coming in contact with contaminated water in swimming pools and other bodies of water. Help reduce the risk of recreational water illnesses by showering with soap and water before entering a pool, taking frequent bathroom breaks and conducting regular diaper checks followed by washing hands with soap and water, say local health officials.

Sunburn is another health concern when swimming outdoors.

“Protect your skin and eyes from the sun’s damaging rays [by] wearing protective clothing and sunglasses,” said Kenya Fluellen, associate professor of nursing at Northern Virginia Community College in Alexandria, Virginia. “Always use sunscreen with a minimum SPF of 30.”

Heatstroke is the number two killer of children after car crashes, and Fairfax County has joined with the National Highway Traffic Safety Administration to remind parents and caregivers about the dangers of leaving children unattended in a car, particularly during the summer, which can lead to heatstroke and even death.

“You should never leave a child alone in the car, and that is certainly true in the summer when the temperatures are on the rise and cars get hot very quickly,” said John Silcox, public safety information officer, Fairfax County Health Department.

Fairfax County officials say there were 30 heatstroke deaths of children left in vehicles in 2014. Most parents simply forgot their children were with them. “Put something in the back of your car, such as a bag or a cell phone, so you’d be certain to check before leaving the car,” said Silcox.

While fireworks are synonymous with July 4th celebrations, creating a fireworks display at home is illegal in some local jurisdictions. In both Alexandria and Montgomery County, Md., for example, all fireworks are illegal to possess or discharge, including gold label sparklers. In Fairfax County, any firework that explodes, emits a flame, sparks higher than 12 feet, or performs as a projectile is prohibited. Arlington County has similar prohibitions.

“We always remind people that the best and safest way to enjoy July 4th is to go to a professional show and let the professionals handle it and just enjoy the show,” said Lieutenant Sarah-Maria Marchegiani, spokeswoman for the Arlington County Fire Department. “Some people don’t know that sparklers are dangerous for kids. They burn hot enough to cause third degree burns. We recommend that adults be the only ones to ignite fireworks.”

If you do want to put on your own backyard Independence Day illumination show, check local regulations, allow fireworks to cool completely and douse them with water before discarding them, advises Marchegiani.