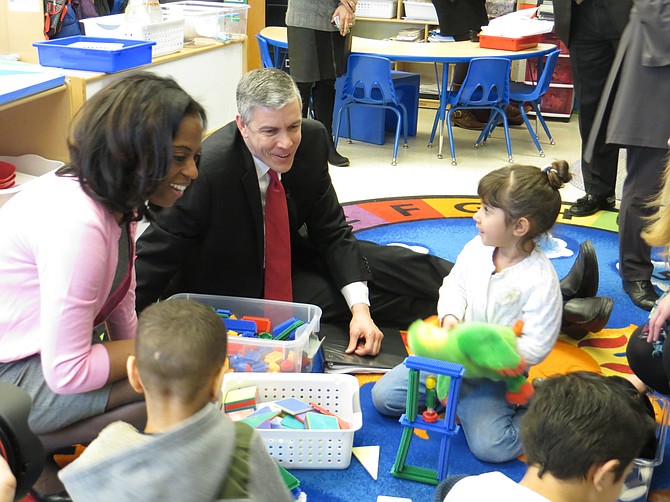 “As a nation, we have not committed to making sure our babies are fully educated,” said Duncan. “Elementary and secondary education is too late. This is not an expense, it’s an investment. We don’t do a great job of catching up kids in [later years]. We need to stop thinking of education as something that starts at five or kindergarten.”

Duncan was joined at the table by U.S. Rep. Don Beyer (D-8), local educators, and parents. Duncan particularly noted the work of Ingrid Bynum, principal of Patrick Henry Elementary, who has increased the number of pre-k classes from six to nine since she was appointed to the position in 2012. Bynum said their current pre-kindergarten classes are currently full.

“It’s heartbreaking when we have parents who call every week to see if space is available,” said Bynum, citing that the city has a waiting list of 100 students. Beyer would later note that this number was deceptively low. The 100-student backlog is just for those who can access “Head Start” program. There are 230 students at near-poverty level in Alexandria who need pre-k but can’t afford it. According to Bynum, the numbers alone make the case. “It’s pretty evident we need more funding.”

“We need less kids on waiting lists,” said Duncan. “The local community has more than done their share of waiting.”

However, despite praise for the program by Superintendent Alvin Crawley, the city-wide Kindergarten and Pre-Kindergarten programs are receiving a $1.6 million cut, from $11.8 million to $10.2 million. Patrick Henry Elementary School is receiving a $13,987 cut to their Kindergarten and Pre-Kindergarten, from $802,795 in 2015 to $788,809 in 2016. However, this stems mostly from changes to the medical and retirement structure affecting all Alexandria school staff. Funding for professional instruction at Patrick Henry increased by $28,525. The budget funds an additional full-time early childhood coordinator and an administrative assistant position, as well as technology resources for pre-k classrooms.

Bynum said the staff focuses on making sure the school engages with the entire community, particularly lower income communities where students are less likely to receive academic instruction at home.

“We use a lot of social media, a lot of word of mouth,” said Bynum. “We go into community centers and go out to public housing, we have playdates with parents. There are 29 different languages spoken with families in Alexandria, so we bring interpreters to these events.

“We need to ensure access,” said Beyer. “If we can do what Patrick Henry has done across the state, the sky is the limit on what we can achieve.”

Lori Shabazz, a kindergarten teacher at Patrick Henry and the Washington Post’s Agnes Meyer Teacher of the Year, said that in the large scale discussion on pre-kindergarten education, it’s important to listen to the feedback from teachers.

“Sometimes classroom teachers get left out of the big process,” said Shabazz.

Shabazz said, in her experience, that students with a pre-kindergarten education tend to have higher literacy and social skills in her class, the latter of which is a major issue.

“These students have already learned to ‘turn and talk’ and learned about ‘peer sharing,’” said Shabazz. “Kindergarten is no longer snack, nap, and play. Students in pre-kindergarten know how to raise hands, take turns, and separate from their parents. There’s a huge academic and social gap between kids with and without pre-kindergarten education.”

Shabazz also noted that pre-kindergarten day care with little academic focus, where most of the day is spent playing, is not the same as a school-focused pre-kindergarten class. It’s a stereotype of early childhood development that Shabazz and Bynum said they have to work against when explaining the program.

“In pre-school, we focus on reasoning and problem solving,” said Bynum. “The children learn languages and build self-esteem.”

Bynum noted several cases where students who struggled in early school ages and were on the verge of being put into remedial classes were eventually tested into a very high percentile. Bynum said she’s haunted by the idea that these children might never have been identified without pre-kindergarten education.

“We need to be able to give our children their best push,” said Bynum.

Eby Aka, originally from the Ivory Coast, is an American citizen and a parent of a Thomas Jefferson student.

“I have seen the good of an early education in my son,” said Aka. “All of our children are born with gold mines in their mind, it’s up to us to exploit that.”