Seniors each place top eight in one event. 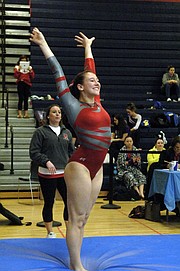 “I am very satisfied with my beam performance,” Brown-Kaiser wrote in an email. “It always feels good to get through a routine without a fall and it was a nice way to wrap up my beam career.”

Brown-Kaiser competed in the all-around after qualifying with a top-four finish at regionals. She finished seventh with a score of 37.

“I am really happy with my overall performance,” Brown-Kaiser wrote. “This was one of my best meets of my personal high school career, so I'm thrilled that I could peak at my last competition.”

On Feb. 20, Brown-Kaiser and Green helped McLean win the 6A team title. The Highlanders, led by head coach Courtney Lesson, became the first Fairfax County team to win the title since Langley in 2004. McLean also captured Conference 6 and 6A North region championships during the season.

“I could not have asked for a more perfect season,” Brown-Kaiser wrote. “Taking home the first-place trifecta as a team and performing one of my best individual meets at states is an incredible feeling. I am so proud of my team and very thankful for my amazing coach Courtney Lesson, friends, and family for their support and faith in the team throughout my final season. This was an extremely memorable year.”