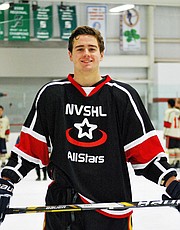 Senior Ice Hockey Captain, Ryan Scott, represented the Bishop Ireton Cardinals at the 2015 Northern Virginia Scholastic Hockey League (NVSHL) All-Star Game on Feb. 18 at the Ashburn Ice House. He was selected by the league coaches as the sole Cardinal at the game which featured the 46 best high school hockey players from the 21 teams in the league across Northern Virginia. Ryan earned his spot in the game by finishing 3rd overall in league scoring with 21 goals and 19 assists for 40 points in 10 regular season games. Ryan also participated in last year’s All-Star game along with then fellow Ireton teammate, Stephen Gerke.

The Bishop Ireton Ice Hockey team finished the season with a 3-7 record but were within one win in their last game of a playoff berth.

Ryan also played his travel hockey for the Northern Virginia Ice Dogs, which plays out of the Mt. Vernon Rec center, culminating last season with a Bronze medal at the 2014 USA Hockey National Championships.