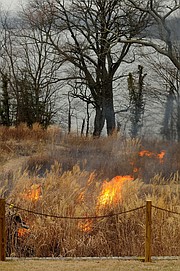 The staff from the Virginia Department of Forestry worked all morning slowly burning the meadow at River Farm.

Burn experts from the Virginia Department of Forestry arrived early Feb. 12 to conduct a burn of the Andre Bluemel Meadow at River Farm. Up until 2010, the meadow had been managed by an annual mowing late in the winter. Without the mowing or burning, the meadow reverts back to woodland. Weather conditions were not optimal, snow flurries were present less than a mile north, the wind speed was very slow, but the crew slowly worked through the quadrants fanning and blowing air on the flame to help burn through the woody invasive species.

The André Bluemel Meadow is a four-acre area that includes many species of native grasses and wildflowers. Two large black walnut trees (Juglans nigra) in the middle of the meadow are believed to date from the time of George Washington’s ownership of River Farm. Red foxes, bluebirds, marsh hawks, ospreys, and bald eagles are often sighted in this area, as well as numerous butterflies and other insects. River Farm is located at 7931 East Boulevard Drive in Alexandria and is the headquarters of the American Horticulture Society.