Also at Focus concert, Lea warms up the night. 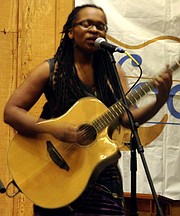 Lea is one of the foremost troubadours on the East Coast, said venue manager Herb Cooper-Levy of Focus Music, a volunteer organization. 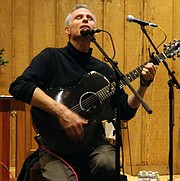 Peter Mayer, who once studied to become a Catholic priest, performed many of his original spiritual songs.

The snow was still thick on the ground Saturday night, March 7, and temperatures were finally just beginning to warm, when the two folksingers Peter Mayer and Lea, like thawing springtime breezes, took their turns regaling the audience in the sanctuary at St. Aidan’s Episcopal Church.

Lea was the first to step up on the improvised pine platform, guitar in hand. A veteran performer who has played before at St. Aidan’s, she had initially planned to be in the audience when at the last-minute she was called to fill-in for folk singer Doug Alan Wilcox who was detained by weather.

Playing her guitar, her feet dancing, body swaying, she sang in a rich alto, first “Sweet Child,” then more original songs like “Little Girl I’ll Show You the World,” “What are You Searching For?” and “Will You Come Home to Your Own Lonely Heart?”

Next up, poet-singer Peter Mayer clambered onstage with a disarming grin telling the crowd it was even colder here than his home in Minnesota and that walking along the Potomac earlier that day, he was startled and captivated hearing river ice scraping.

Once a theology student studying to become a Catholic priest, his first songs were directly spiritual, with titles like “Next Train to Jerusalem,” “God is a River” and “All the World is One,” which brought the house down, his voice a sonorous tenor.

Then came an tune for children called “Dr. Seuss is On The Loose in Your Brain” which had the roomful of adults singing along, and later comic songs like “Drivin’ With My Knees” and another about online dating which leads to the girl across the street.

In poetry set to music, he went on to sing of the cosmos, of nature, of his love for his wife Beth, then returning to the spiritual with “Everything was Holy Now.”

At evening’s end, Lea joined him onstage for a rousing rendition of Pete Seeger’s “If I had a Hammer” then after an encore Mayer’s tune “Runnin’ with the Buffalo.”

The next Focus concert at St. Aidan’s is April 11 with David Mallett plus Friction Farm. For more information on these performers and other Focus concerts in the D.C. area, visit FocusMusic.org.