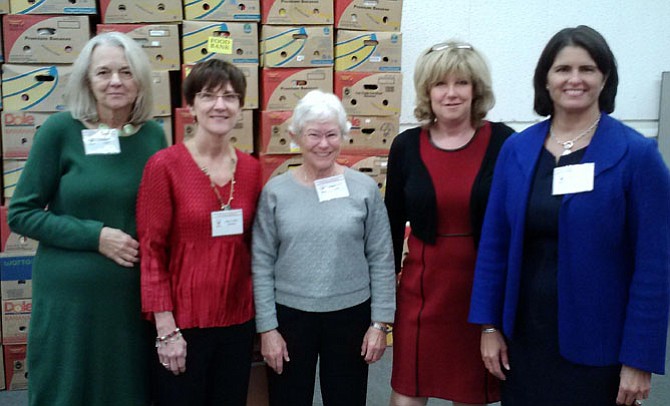 With UCM Board Chair Gigi Hyland (far right) are several newly elected board directors, including (from left) Claudia Creo, Suzy Coffey (President of The Friends of UCM), Abigail Arms, and Diane Brooks. Not pictured is Kenneth Disselkoen. Photo Contributed

Hyland, board chair, has been a board member since December 2012. She is currently executive director at National Credit Union Foundation. Previously she served as a board member of the National Credit Union Administration (NCUA), the independent federal regulator for the nation’s credit unions. She was NCUA’s representative on the board of directors at NeighborWorks America, where she served as chairman during her tenure. Prior to NCUA, Hyland's career spanned 14 years serving the credit union community as an executive, attorney and advocate. She was also a managing partner of the family law firm, Hyland and Hyland. A graduate of the College of William and Mary with a B.A. in comparative literature, Hyland earned her J.D. from George Mason University School of Law and an Advanced Diploma in International Law from McGeorge School of Law. Hyland and her husband Chris Revere live in the Wessynton neighborhood in Alexandria.

O’Connor, vice chair, has served on the UCM board since March 2011. He recently retired as senior counsel in the Labor and Employment Practice at Morgan Lewis in Washington D.C., focused on labor-management relations, particularly collective bargaining. His experience includes extensive work in the employee benefits area, particularly employee benefits derived out of collective bargaining with particular emphasis on pension and health benefit issues. He has a bachelor's degree from College of the Holy Cross and a law degree from Boston College. He has been involved with Holy Trinity Church in Washington D.C. and with the Washington Jesuit Academy, and has done pro bono legal representation for the DC Bar.

Conti, treasurer, has served on the UCM board since December 2012. He is a retired senior banking executive, retiring in 1992 as a senior vice president with Bankers Trust Company after a 23 year tenure. In retirement he has served as a financial services consultant primarily to the Polish American Enterprise Fund in Poland, as well as other clients in Poland and Russia. Conti has served as a board member and officer at several organizations in both New York and the greater D.C. metro area. He is a member of the Emeritus Board of the Children’s Law Center in Washington D.C. and of the Alumni Board of Doorways for Women and Families in Arlington. A graduate of Fairleigh Dickinson University with a B.S. in business management, Conti earned his M.B.A. from the Bernard Baruch College of the City University of New York. Conti and his wife Dorothy live in The Manors at Mount Vernon in Alexandria.

Heddesheimer, secretary, has served on the UCM board since December 2013, when she retired from The George Washington University as counseling professor emerita. During her 40-year tenure, she served in many academic and administrative roles including teaching numerous graduate counseling classes, serving one term as a department chair, and 24 years in dean roles as assistant and associate dean, academic associate dean, senior associate dean and twice acting dean. She is a licensed professional counselor in the State of Virginia and a national certified counselor. A graduate of Coe College with a B.A. in English, she earned both her M.A. in counseling and guidance and her Ph.D. in counselor education at The Ohio State University. Heddesheimer and her husband Jon live in the Mason Hill neighborhood in Alexandria.