Car engulfed in flames when officer leads man to safety. 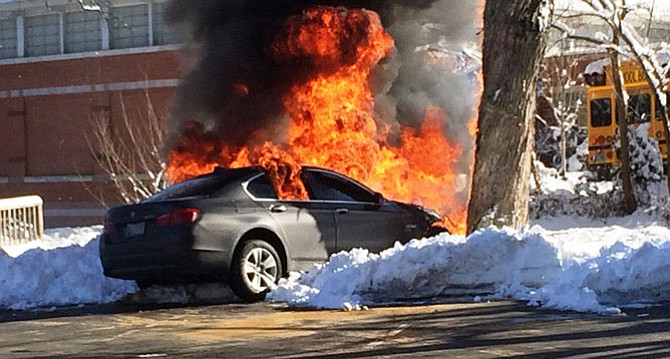 Officer Sharif Issa "didn't run away from a fire, he ran into a fire," said Lucy Caldwell, public information officer with the Fairfax County Police Department.

Issa saved the life of a 38-year-old Maryland man on Friday, March 6.

Issa was returning to the McLean District Police Station when he was called to a report of a car on fire in the parking lot of the American Legion at 1355 Balls Hill Road in McLean at 3:30 p.m., according to Fairfax County Police documents.

"The man was in the car and seemed confused and wasn't reacting to the fact that his car was on fire," said Caldwell.

"He could have easily died," she said.

The car struck a tree next to the parking lot and flames were quickly spreading, according to police reports.

"The officer was concerned himself," said Caldwell.

Issa urged the man to get out of the car, but because he was confused Officer Issa grabbed him by the hand and led him to safety, Caldwell said.

Upon further interaction with the man, Issa became suspicious that he might be intoxicated and conducted a series of sobriety tests, according to police reports.

The Maryland resident was charged with DWI and taken to the Fairfax County Adult Detention Center, according to police reports.

Police generally don't release BAC levels, said Caldwell. "He was over the limit and was taken to jail."

Issa has been with the Fairfax County Police Department for nine months; he came from George Mason Police where he had worked for six years, she said.

"This is a reminder that officers are in dangerous situations," Caldwell said. "This is the life they have chosen."

Visit www.aa-dc.org for information about Alcoholics Anonymous and a search for meeting location and times in the Washington Metropolitan area.