County Board approves office complex despite concerns about vacancies. 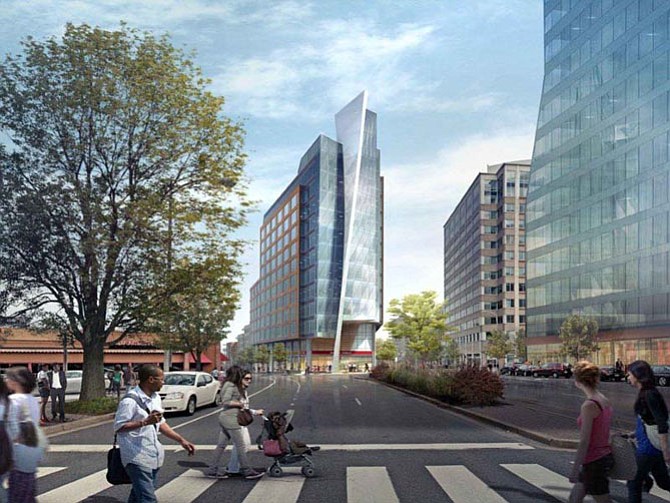 Rendering of the new designs for 2025 Clarendon Boulevard /Graphic Contributed

“We’re not getting the General Services Administration tenants we had in the past that take up whole buildings and complexes.”

A new 12-story office building at 2025 Clarendon Boulevard will change the face of Arlington’s Courthouse neighborhood. At its March 14 meeting, the County Board unanimously approved the redevelopment despite concerns about the design and use of the building.

Peter Schulz, from the Department of Projects and Planning, compared the new structure to the Flatiron building in New York City as a wedge shaped design in the heart of Arlington’s Courthouse metro area. Schulz said the building’s design fits the county’s ambitions to alter the local skyline with buildings that taper the density and height up towards the metro complex. The new building will occupy 195,870 square feet, including 6,960 square feet of ground floor retail. The design also includes 244 parking spaces in an underground garage.

The site is currently occupied by a Wendy’s and Wells Fargo. As a condition of buying the property, the property’s developer, Carr Properties, a large portion of the first floor retail space was taken up by the new Wells Fargo location.

In a Sept. 2014 report, staff said the 3,375-square-foot Wells Fargo Bank branch on the ground floor of the new structure was “inappropriate” for the location. In response, Carr added a fourth 995-square-foot retail area to the Clarendon Boulevard side of the building, with the aim of using the space as a coffee or sandwich shop.

“Planning principles have to accommodate where the market is,” said Erik Gutshall, a member of the Arlington Planning Commission. “Normally we would not want to see a bank use on a prime retail spot, but I think the [Site Plan Review Committee] recognized that this is something that needed to be accommodated to make all of the other successful parts of this project work out. We did work to find ways to mitigate that use.”

Some on the County Board raised concerns regarding the rest of the space being used as offices, particularly with a 20.5 percent office vacancy rate throughout Arlington, with numbers as high as 28.7 percent in Rosslyn.

“We have record high office vacancies across the county right now,” asked County Board Member John Vihstadt. “Why do you believe your building is a breed apart? How are you going to surmount the current and near term office vacancy dynamics in Arlington?”

According to county staff, the new office spaces in the building are smaller than traditional office spaces and are more reflective of a new type of development in Arlington.

“The people we’re recruiting to come here as tenants are downsizing and want more flexible space,” said County Manager Barbara Donnellan. “The 10,000-square-foot 30,000-square-foot tenant is who we’re trying to attract and keep here. We’re not getting the General Services Administration tenants we had in the past that take up whole buildings and complexes.”

Gutshall commented that the Planning Commission was excited to see developers continuing to build new office development in Arlington, despite the vacancy rate.

The discussion in the County Board meeting also took the unlikely turn towards a discussion on the nature of art. The development currently plans to build a mural based on a picture of local historic figure Crandal Mackey on one of the building’s blank walls. Mackey was an Arlington Commonwealth Attorney who, in 1905, led a series of raids against brothels and bars throughout Rosslyn to tone down the area’s nightlife, an event that neighborhood’s nightlife has never fully recovered from. A park in the county was named after Mackey, but a new Central Place development will replace that park. So with a blank space on a property once owned by Mackey, the developer included the mural as a tribute to the prosecutor.

While the design was approved by the Arlington Historic Affairs and Landmark Review Board, Jon Hensley from Arlington’s Public Art Committee took objection to art being added to a public space without any input from Arlington’s artistic community.

Carr has said the project’s development schedule is to be determined, while no current plans are set for the removal of the Wendys and current Wells Fargo bank from the site. After approval of the project by the County Board, Carr has three years to begin development.