The beloved novel, “The Secret Garden” by Frances Hodgson Burnett, has been transformed into a musical that will be gracing the stage at NextStop Theatre. It is “a joyful, entertaining story about the enduring power of love, through all obstacles and across all boundaries,” said Evan Hoffmann, director of the NextStop production. 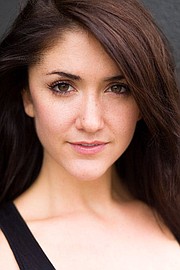 Katie Keyser who plays Lily in the NextStop Theatre production of “The Secret Garden.”

With “some of the most fantastic music that I have ever had the pleasure of working on,” the production is a musical journey of an orphaned girl dealing with heartbreak to find redemption. “It is a very honest and thoughtful examination of the powerful (and sometimes painful) bonds that hold a family together,” added Hoffmann.

“The Secret Garden” is a multiple Tony Award winning show with a score of about 30 numbers by Marsha Norman and Lucy Simon. Music director Steve Przybyski and a seven-piece orchestra will give vibrancy to a wide-array of eclectic music, “from sweeping waltzes to heartbreaking ballads to high-energy folk-rock, and stopping everywhere in between.” With a set design by Andrew Cohen, the audience will be transported from “a Yorkshire manor, the moors, India, and a magical garden.”

Bobby Libby who portrays Dr. Neville Craven, called “The Secret Garden” “a gorgeously rich and intricate score…a moving story that is a meditation on loss and love” The themes are “universal; it's the epitome of a show that can appeal to audiences of all ages and backgrounds.”

Katie Keyser described her character of Lily as “the guiding light in this story” representing “the peace” that others seek. Without giving away too much for those less familiar with “The Secret Garden,” Lily’s character has a profound effect that is key to the show’s redemption qualities. “She found simple pleasures in being surrounded by nature when tending to her garden…She yearns for her husband and her child to find happiness.”

The musical has two child characters. NextStop will have four young actors rotating into the roles. As “Mary,” Isabella Brody and Maggie Slivka. As “Colin,” Eli Schulman and Ethan Van Slyke

Why will audiences of all ages enjoy “The Secret Garden?” Cast as Archibald, John Loughney said, “to put it simply, it's a gorgeous score coupled with a touching story.” Kesyer added, “come for the story and the music! It is a retelling of a classic children's story, dealing with heartbreaking loss and change and how, through the eyes of a child, discovering a new life is always possible.”