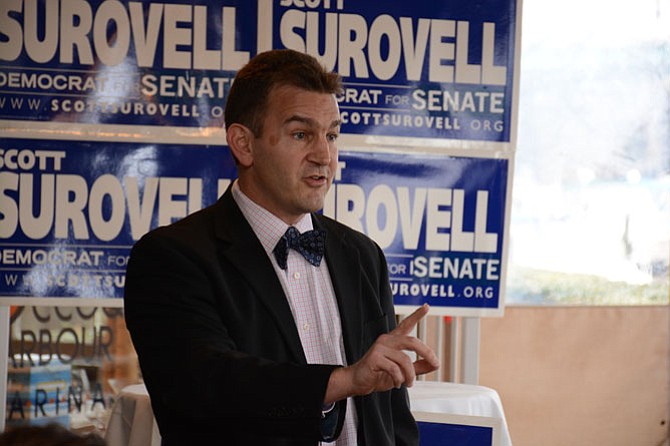 “He’s been trying to do things down in Richmond,” said Seeley, who came to The Landing to support Surovell kicking off his campaign for state senator representing the 36th district. “He’s thoughtful and he’s a winner,” Seeley added.

“When you lose somebody like that, those are huge shoes to fill,” said Sen. Chap Petersen (D-34), and Surovell “understands the history of the Commonwealth.”

Del. Alfonso Lopez (D-49) spoke to the 33 percent of the 36th district who speak a language other than English at home. “This community is forgotten far too often,” he said, adding that he believes Surovell has been a great advocate for that population.

Puller also gave Surovell her full endorsement. “He really is a product of Mount Vernon,” she said. “I’m thrilled to have Scott running for my seat.”

Surovell followed Puller at the podium and praised her work representing the 22,000 veterans living in the 36th district. “They’ve had no fiercer advocate than Sen. Puller,” he said. “And she’s been a tremendous advocate for the Route 1 corridor.”

The current delegate went on to outline some of the bedrocks of his campaign platform, highlighting working for transportation upgrades and redevelopment of the Route 1 corridor, getting better funding back to students in the area, striving for economic fairness and expansion of Medicaid, and taking steps forward on environmental issues such as solar energy and stormwater management.

“There are 200,000 people in this senate seat,” Surovell said, “and only about 100,000 are registered to vote.” Many of the rest, being children and adolescents too young to vote, Surovell confirmed his dedication to represent all of them.

When he first got to Richmond as a delegate, he recalled, and walked into the state capitol with the aged statue of George Washington, “the reality of it all hits you in the face. It’s not about politics, it’s about real people.”

The first few days, he said, you wonder: “How did I get here. After a few days, you ask how did all these other people get here?”