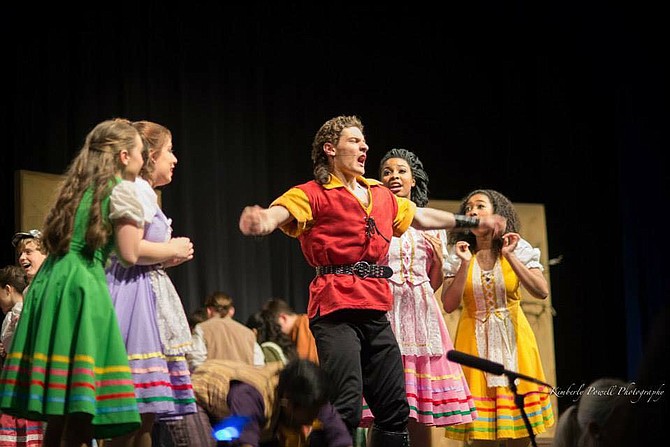 On a dark and stormy night, a selfish prince denies an old woman refuge in his palace … and is left with a curse that can only be broken by true love. Thus begins Centreville High School’s spellbinding production of “Beauty and the Beast.”

The well-known tale of “Beauty and the Beast” found its way into the hearts of families everywhere when the Walt Disney Pictures animated classic was released in 1991. The iconic story follows a lovely village girl who finds herself imprisoned in the castle of a horrible beast. After trials and tribulations, she eventually breaks the curse on the Beast by realizing that she truly loves him. The movie was a huge success. Only three years after its release the Broadway musical opened at the Palace Theatre. With music by Alan Menken, lyrics by Howard Ashman and Tim Rice, and a book by Linda Woolverton, Beauty and the Beast received nine Tony Award nominations and won for Best Costume Design.

Seeming to leap straight out of the Disney animated movie, the massive ensemble of gullible townspeople, dancing cutlery, ferocious wolves, and even a unicycling whisk carried the show with their boisterous energy and over-the-top gestures in numbers such as “Gaston” and “Be Our Guest.”

As the menacing and mysterious Beast, Nick Ingargiola beautifully transitioned his character from the hot-tempered creature that Belle fears in the beginning of the musical into the soft-hearted man Belle learns to love. Ingargiola showcased his powerful vocals in heartbreaking songs such as “If I Can’t Love Her,” displaying a great range of facial expressions and gestures despite his mask and bulky costume. His chemistry with Cameron Daly as Belle was believable and touching, especially when Daly read aloud to the Beast from King Arthur. When the Beast was grievously injured at the end, Daly’s heartbreak as she sobbed over her dying love was poignantly genuine.

Joshua Ewalt had the audience roaring with laughter in his role as the manly and self-centered Gaston. In his ill-fated proposal to Belle in “Me,” he impressed the audience by scooping Belle up multiple times mid-note without ever faltering. His lively dynamic with sidekick LeFou, played by Sam Ahmed, added energy and hilarious physical theatre aspects to numbers such as “Gaston.” Emilio Canals, as the flirtatious French candlestick Lumiere, carried numbers such as “Be Our Guest” with great energy and commitment, maintaining his accent flawlessly. As the equally flirtatious and French feather duster Babette, Nora Winsler stood out vocally by hitting incredibly high notes in large group numbers.

The technical aspects of the show were skillfully done. The set, from the bright and colorful village to the menacing woods, completed the atmosphere of each scene. Set transitions were done quickly and fluidly despite some set pieces appearing difficult to move. Although occasionally actors were in the dark, the enchanted rose was kept illuminated at all times, which provided a very beautiful effect. The use of fog in the Beast’s transformation was especially impressive because it allowed the actors to seamlessly execute the switch.

As certain as the sun rising in the east, Centreville High School’s Beauty and the Beast left the audience well-satisfied with their beautiful retelling of the “tale as old as time.”