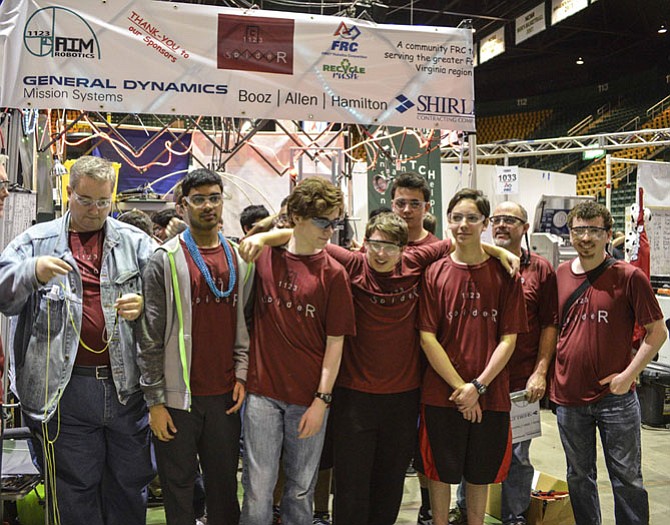 The crowd at the Patriot Center cheering their teams on.

This past Friday and Saturday the annual Greater DC Regional FIRST (For Inspiration and Recognition of Science and Technology) Robotics Competition was held at the Patriot Center: Forty-eight teams primarily from Washington D.C., Virginia, Maryland created robots to compete in this year’s game “Recycle Rush.”

Six weeks before competition, teams are given identical starter kits that have all the rudimentary parts required to produce a robot with the necessary functionality to compete. However, the kit alone is not enough for complex maneuvering and teams must get creative, using materials from an approved supply list to build a truly competitive robot. Obtaining the necessary materials can be an expensive endeavor for a high school robotics club, and so many teams enlist corporate sponsors for help.

“Having corporate sponsorship is the only way this really works,” said Jerry Stueve, a parent volunteer from the Herndon High team. “When people from within the industry come out and help, together with the students, parents, and teachers, it becomes a real team.”

Herndon High School’s team “Epsilon Delta” in partnering with NASA headquarters was able to acquire three 3D printers which allowed them to build scale models of the arena, and some parts they used on their robot.

EACH TEAM is given six weeks of build time before the competition to get their robots ready. They are asked to complete changes annually, this year’s theme centering on sustainability. The game is played by two teams of three robots each. Robots score points by stacking totes on scoring platforms, capping each of those stacks with recycling containers and properly disposing of pool noodles thrown into the field arena, representing litter. In keeping with the year’s theme, all game pieces used are reusable or recyclable.

While the competition is the center stage event, FIRST’s mission to encourage “gracious professionalism” extends well beyond the arena. “The robotics is really just a small portion of what this is all about,” said Computer Science teacher Oliver Small. “It’s all about safety, outreach, visibility, engineering, and teamwork. It’s a kid driven event that allows them to decide what they want to learn, and find a way to learn it.”

Many students participating have STEM interests, like Abbey Kasanagottu, a junior at Centerville HS. “I wanted to be a dentist before joining this team, but now I am seriously considering a mechanical engineering.”

But since the project is completely student driven, not just when building the robots but in fundraising, crafting grant proposals, and doing outreach, others use the competition as a way to feel different interests. Caleb Wilkinson, a student on the Herndon HS team wants to go into media. “For this competition I focused all my efforts on documenting our project visually and promoting outreach as our media representative.” said Wilkinson. “Not everyone here wants to go into a STEM field, some of us want to go into business or even writing and this serves as a platform for us to explore those interests.”

AT THE END of two long days of competition it was the coalition of the RoHawks from New York City, Cougar Robotics from Oakton HS, and the CAV-ineers from Severn, Md., who emerged victorious, advancing to nationals in St. Louis, Mo. Teams from Chantilly HS, Marshall HS and Battlefield HS received judges awards and will also be going to nationals.